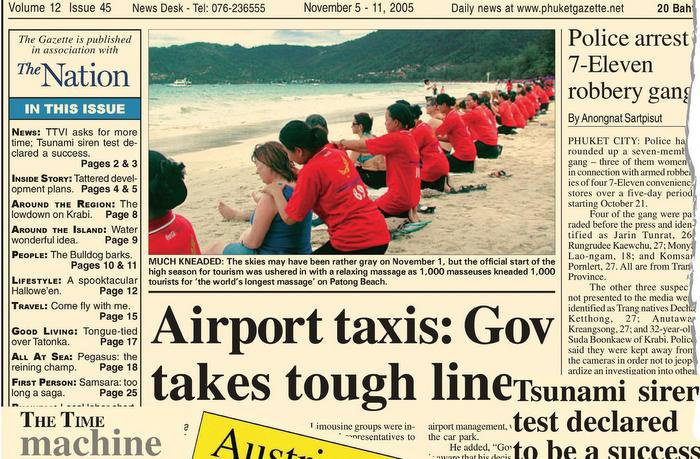 PHUKET: As Phuket continues to stumble through the fog of beach rules following the National Council for Peace and Order’s cleanup last year, it is refreshing to look back on simpler times at Patong Beach. Just a decade ago, as the island geared up for its first high season after the tsunami, a total of 1,000 masseuses rolled out beach mats and got to work on 1,000 tourists for what was reportedly the world’s longest massage. There is something striking about the photo; no beach umbrellas, chairs or loungers. And despite the presence of more than 2,000 people on the beach, it looks beautiful.

The lead story, however, has nothing to do with the picture on page one. It is, in fact, that masochistic, perhaps even necrophilic, dead horse that just keeps on keeping on: airport taxis.

Ah… yes, even with the taxi mafia allegedly being swept up in island-wide raids last year, the issues of taxis to and from the airport continues to rage on. Nonetheless, the November 5-11 issue of the Phuket Gazette marked an important step forward: meter taxis were to be granted a desk inside the arrival hall of Phuket International Airport and three cabs at a time were given room to park outside the hall – the sacred territory of the island’s airport limousines. Of course, how many years it took to get the metered taxi drivers to use their meters was a completely different issue.

Then-Phuket Governor Udomsak Uswarangkura took a strong stance at the time, saying he wasn’t worried about limousine driver protests – something that nearly every governor since has had to face for one reason or another – as his main concern was that tourists and other airline passengers should have a fair selection of transportation options in Phuket… what were we saying about dead horses again? [See support for GrabTaxi, monorail, yellow-roofed tuk-tuks, roaming metered taxis and the list goes on… yet traffic congestion congeals and personal transport options remain everyone’s primary way of moving throughout the island.]

In a slightly different power struggle on the island, Kamala Tambon Administration Organization (OrBorTor) president pushed to take over the enormous re-development and beautification of the area from the Tourism Authority of Thailand (TAT), which appeared to be struggling to deliver on the multi-million baht projects in Patong and Kamala. The budgets for the two projects, originally a robust amount of 1.35 billion baht, were slashed back by the Budget Bureau to 291.6 mn baht. To compound the problem, locals in Kamala seemed to be questioning whether or not the TAT was the best agency to carry out the project at all.

“If the TAT can’t do any better than this, we should do the project ourselves. That way the whole job will get done instead of only half of it,” said OrBorTor President Jaran Sanrak. “I want Kamala to recover. If we can’t get it done immediately, then that’s alright, we can get it done more slowly, but the one thing I don’t want to see is the plans and the funds disappearing because we didn’t act fast enough.”

In stark contrast, Patong Mayor Pian Keesin – who died shortly after being removed from office for alleged voter fraud (again) last year – was very happy with the development of Loma Park and the rest of the party town. He did put in a bid for underground power lines, but a quick glance out of any Patong hotel window at the rats’ nests of electrical wires shows where that idea went.

Warming up for Laguna Tri-Fest