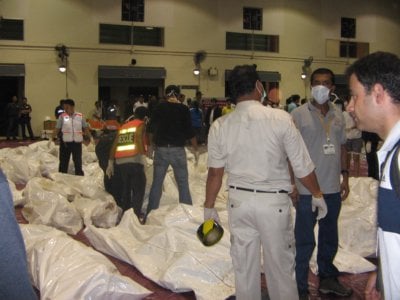 PHUKET: Of the 130 passengers and crew aboard One-Two-Go flight OG269 that crash landed at Phuket International Airport about 3:45 pm today, only 42 survived the crash and fire that followed it. Of these, 15 were Thai nationals.

At a press conference at the Airports Of Thailand office about 9 pm, Phuket Airport Director Sq Ldr Pornchai Eua-aree said the crash was the result of a “mis-approach” landing, after which the pilot tried to regain enough speed to take off again – but failed.

Most of the survivors were either thrown from the fuselage when the plane crashed into a berm alongside the taxiway or managed to escape before the intense fire that followed, he said.

All 42 survivors were rushed to hospital. Thirty were sent to Bangkok Phuket Hospital, 10 to Phuket International Hospital and two to Vachira Phuket Hospital.

Five escaped with minor injuries that did not require treatment.

Two of the seven crew members aboard the the McDonnell Douglas MD82 aircraft survived. They were identified as cabin crew members Orasin Saengboonruang and Apichit Batha.

Both the pilot and co-pilot were killed.

The bodies that rescue workers have recovered are being kept in a makeshift morgue in an airport hanger.

Udom Thantprasongchai, Managing Director of Orient Thai, which operates the low-cost One-Two-Go service, is expected to arrive in Phuket soon from Krabi.

He will be accompanied by Ministry of Interior Permanent Secretary and former Phuket Governor Pongpayome Vasaputi and Deputy Transport Minister Sansern Nongchooam.

Death toll at 89, all bodies recovered