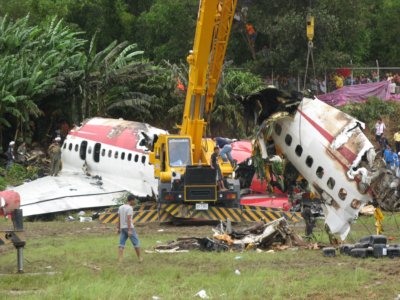 PHUKET: As Phuket woke up to memories of yesterday’s airport disaster, the death toll of those on board One-Two-Go flight OG269 stood at 89, including five crew members.

The victims’ bodies are being kept in a makeshift morgue at Phuket Airport Hall, a multipurpose building to the south of the main airport terminal.

Among the foreigners who perished was 56-year-old pilot Areef Mulyadi, whose nationality was not officially released but is understood to be Indonesian. The co-pilot, a Thai, also died.

The hospital had earlier reported the number of survivors as 42 because one person being treated at the hospital, who was admitted around the time of the crash in a separate incident, was mistaken as being on board flight OG269.

Orient Thai Director K. Udom arrived in Phuket last night. In addition to expressing his regrets and condolences, he said the airline will provide free transport and accommodation to the family members of all survivors as well as an initial compensation payment of 100,000 baht for each victim.

“We can’t say at this point how much we will pay in total compensation, but don’t worry because we will do our best,” he said.

Although AOT had originally wanted to reopen the airport for service at 7:30 tonight, the airport officially reopened at 4:00 this afternoon.

Prime Minister Surayud Chulanont arrived in Phuket at 4.40 pm to visit survivors at Bangkok Phuket Hospital and Vachira Phuket Hospital. He was due to return to Bangkok tonight.

Now that all of the bodies have been recovered, workers are using a crane and other heavy equipment to remove the rest of wreckage along the side of the runway where the plane came to rest after breaking in two.

The wreckage and its removal continues to attract scores of onlookers, despite efforts to restrict the view by putting up plastic sheeting along the chain-link fence that surrounds the airfield.

One survivor, Nong Khaonuan, told the ASTV television network in a telephone interview this morning that he had suffered only an injury to his ear. His wife, K. Ladda, also survived, but suffered a severe blow to her forehead.

Rescue workers were on the scene within 10 minutes of the accident and it was not raining heavily when he escaped the fuselage, said K. Nong.

In a telephone interview on military-run Thai TV Channel 5, Transport Minister Gen Teera Hawjaroern expressed condolences to the families of all who perished in the disaster and praised the efforts of rescue workers and medical staff in getting survivors to safety.

Currently only three survivors, all Thais, are listed as needing intensive-care treatment. All are being treated at Phuket International Hospital. They were listed on the One-Two-Go website as: Likhit Liengpansakul, Parinwit Choosaeng and Chainarong Maharae.

Click here for more information about the flights, or to view the list of survivors or the full flight manifest.

The airline also operates a telephone hotline at 1126.

Click here to view the Gazette photo archive of the crash of Flight OG269.