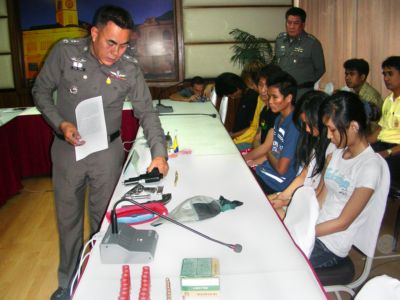 PHUKET CITY: Police yesterday afternoon announced the arrest of a six-person ya bah (methamphetamine) gang who allegedly sold the drug to youths at Saphan Hin.

In an attempt to avoid capture, one of the gang members allegedly tried to shoot at police, but his homemade gun failed to fire.

After a receiving a tip-off that Oot, Nong and Jack had been selling ya bah to local youths at 350 baht a pill, undercover police officers arranged to buy the drug from the trio just before 1 am yesterday.

When the officers identified themselves, Ood allegedly pulled out a gun and tried to shoot one of them, but his weapon failed to fire.

The three were found in possession of 17 ya bah pills and three handguns: two of them homemade and the third a loaded stainless-steel .32 caliber automatic pistol.

During questioning, the three identified their suppliers as Big and Lek, then led officers to the house where Big was staying with his girlfriend (Lek) at the Phuket Villa Dowroong housing estate off Chao Fa East Rd in Wichit.

There, police arrested the other three suspects and seized 560 pills and two weapons, one of them a 12-gauge shotgun with 20 shells.

In total, 147 bullets and shells of various calibers were seized, including 111 rounds of .22 caliber ammunition.

All six suspects have been charged with possession of Class 1 narcotics with intent to sell. Further charges are pending following an investigation into the weapons the gang had acquired.

Gen Apriak explained that the gang bought the pills in Bangkok in lots of 800 and had them delivered to Phuket by parcel on regularly scheduled buses, paying for each shipment by electronic bank transfer.

The gang identified their two suppliers in Bangkok only by their nicknames: Go and Meng.

PM and Foreign Minister seen as ‘Dead and Buried’