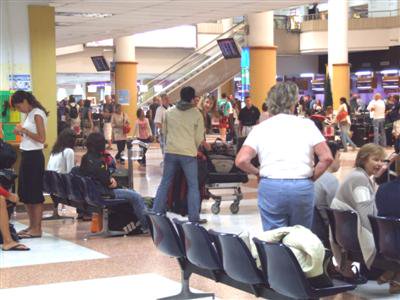 Protests by the People’s Alliance for Democracy (PAD) forced authorities to close Suvarnabhumi to all air traffic at 4 am today.

Bangkok’s Don Muang airport remains open, though it is understood there have been cancellations there too.

Of almost 5,000 passengers due to fly to Bangkok from Phuket today, only 500 will be making the journey. All will be flying into Don Muang Airport.

International flights to and from Phuket are unaffected.

All eight Air Asia flights to Suvarnabhumi Airport have been canceled, affecting 1,220 passengers.

All Thai Airways and Bangkok Airways flights to Suvarnabhumi have also been canceled, affecting over 3,000 passengers.

Some flights due to land at Suvarnabhumi have been diverted to other airports around Thailand, including Chiang Mai, Don Muang and Phuket.

Two diverted flights landed at Phuket today. The first was an LTU plane with 264 passengers that arrived from Berlin this morning. The passengers were transferred to the Phuket Merlin Hotel.

A Thai Airways flight with163 passengers arrived from Sydney later in the afternoon.

In a press conference held at PIA this morning, Airport Director Wicha Nernlop stated that buses would be arranged to transfer stranded passengers to Bangkok, if required.

Phuket Governor Preecha Ruangjan was also in attendance. Speaking about the prospect of protesters attempting to close down PIA, he stated that police officers have inspected the airport and are observing the movements of PAD protesters in Phuket.

The Phuket Tourist Association issued a statement earlier today asking its members to do their best to accommodate stranded tourists and assist them in contacting airlines and finding alternative means of transport.