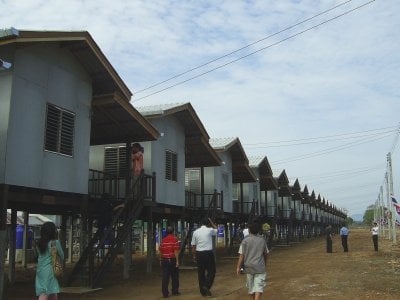 At the Sea Gypsy Village at Laem Tukkae, 24 Sea Gypsy families moved into new permanent dwellings at a ceremony presided over by Governor Udomsak Usawarangkura.

The Governor also planted two mangrove seedlings in the nearby intertidal zone, saying he would like to promote the village as an eco-tourism destination.

When asked by a reporter about rumors that a private party had claimed ownership of the land on which the homes were built, the Governor said that officials had done a thorough check and determined that the site was state land.

Construction of the new homes, funded by Wanlop Chienwanond through the St. Gabriel School tsunami fund, was overseen by the Phuket Office of the Ministry of Social Development and Human Security and carried out by construction crew from the Royal Thai Navy. Under the plan, two more homes will be built in the area.

Sea Gypsy Nuk Pramongkij said he was happy with his new home and said the whole community were glad to have somewhere to live after being homeless for so long.

“Homes are our first priority; the second is getting the tools we need to make a living, such as longtail boats,” he said.

At Klong Pak Bang, 16 families formally took possession of homes funded by donations made though the iTV television network and built with the assistance of students from Phuket Technical College.

The 40 dwellings raised the number of new homes turned over to tsunami victims under the project to 43. The first three, in Cherng Talay, were completed in February.

Pannee Sittikan, head of the Phuket Office of Social Development and Human Security, told the Gazette that a total of 117 permanent homes would be built around the island. All should be completed by the end of April, she said.

Body in sea ‘probably a foreigner’