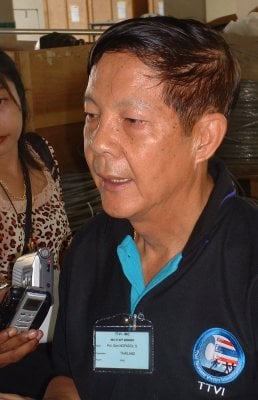 PHUKET: A total of 338 tsunami victims buried temporarily at Mai Khao Cemetery have been identified and returned to their families.

All but two of the bodies identified so far were foreigners, said Gen Noppadol, who added that the identification process had moved much faster since Disaster Victim Identification (DVI) officers had started to run information about the bodies through the Interpol database.

And he said that of the 1,703 bodies at Wat Yan Yao, Phang Nga, just 21 had been identified so far, largely because information from the bodies there was not on the Interpol database.

Gen Noppadol revealed that dental checks, fingerprints and physical characteristics rather than DNA have been the main methods of identification, especially at Mai Khao.

He said, “In 95% of cases, we have used dental records for identification, and 5% have been identified from their fingerprints. We have used DNA for matching in just one case so far.”

DNA identification was the most difficult method to use, Gen Noppadol explained, mainly because the TTVI computer cannot handle the very large amounts of data involved.

He revealed, too, that his staff will re-examine bodies at Wat Yan Yao – where bodies of victims from Phang Nga who are believed to be Thai are being kept – and re-recording information about them, such as their height, and re-taking fingerprints.

Earlier this month, the mortuary wat was closed and controversial top forensic scientist Dr Khunying Pornthip Rojanasunan, who had been in charge there, returned to Bangkok.

Just days later, the mortuary was re-opened, but Dr Pornthip was told she could not resume her work there.

Gen Noppadol said he expected it would take around two weeks for the data to be re-collected, although it would probably be months before the bodies there were identified.

Relatives of the missing – Thai or foreign – are being asked to provide details of any identifying marks or characteristics – from amputations and operation scars to birthmarks and tattoos, that could help identify the bodies remaining at Mai Khao and Wat Yan Yao, said Gen Noppadol.

“If the families can supply this information, the identifications will proceed much faster,” he said.

The general expects the identification of bodies at Wat Yan Yao to be more complicated than at Mai Khao, partly because some corpses there are too decomposed for identifying marks to be detectable, and partly because it is unlikely there will be dental records for some of the bodies there, particularly if they are of poor Thais.

So, he said, DNA analysis would have to be used, rather than physical characteristics.

Gen Noppadol urged the relatives of missing Thai people not to go to Wat Yan Yao, but instead to contact their local police for information.