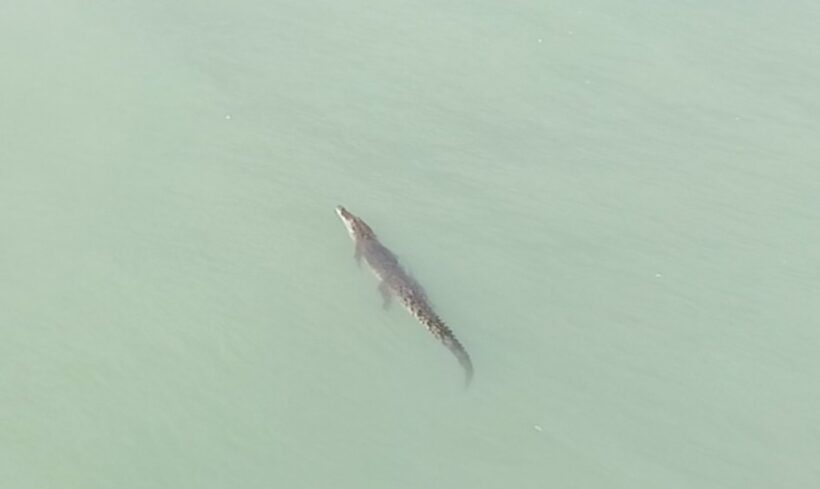 So this is how it happened…

Phuket expat ‘Mike’, along with his wife, were walking their dogs along Bang Tao beach last Friday. They say they normally start their walk around 2 kilometres south of the small island adjacent to the beach near Layan. On this particular morning they decided to walk in the opposite direction to the south instead of north.

Upon returning to their starting point around 8 am they met up with an Australian they often see who also has a few dogs. He asked the couple if they’d seen the ‘Croc’ and pointed just beyond the break. Mike made a comment at the time… “it surely must be a log” as he was surprised at the description of the size (around 3 metres!).

The Australian pointed out that the ‘log’ was actually “swimming against the drift” and Mike was able to confirm that. Mike and his wife eventually could see the reptile quite clearly as they could see it floating on top of the swell, and that it was, indeed, a large crocodile. The Australian said he would follow the crocodile which was moving to the south while Mike headed home to collect his son who had a drone (quad copter) and his telephoto camera equipment.

When Mike returned about 20 minutes later the Australian had gone but he noted some Burmese workers next to a hotel on Bang Tao beach all pointing and staring out to sea. The crocodile was still moving slowly south.

The drone was launched and started moving in to get some closer footage. Unfortunately as soon as the flying camera was within 20-30 metres the crocodile would dive and stay submerged for lengthy periods. But the video is certainly sharp enough to identify the creature as one VERY large crocodile.

The pilot of the drone was also a local expert in ‘all things marine’ and proposed the theory that the reptile may have drifted in from the Andaman Sea with the stormy weather.

We’d be happy to hear any other thoughts about the origins of this large, and dangerous, reptile.

It goes without saying that you should avoid swimming in any area with a 3 metre crocodile. If you do see such a beastie along the Phuket coast contact local wildlife authorities immediately.

Robber caught with a long list of items worth 400,000 Baht