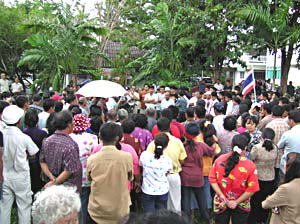 PHUKET TOWN: About 200 villagers from Rawai descended on Phuket Provincial Hall this morning to demand that police expedite the investigation into the September 6 shooting of a 17-year-old boy, allegedly by an off-duty policeman. The shooting, which occurred at 2 am at the Monkey Pub on Takuapa Rd, in Phuket Town, has left the first-year Phuket Technical College student deaf in the right ear and blind in the right eye. The bullet is still lodged in his head. The protesters calmed down when Phuket Town Police Station Superintendent Pol Col Paween Pongsirin, Phuket Provincial Administration Organization President Dr Prasit Koeysiripong, and Phuket Chief Administrative Officer Witsawa Sathitsamith agreed to meet Manoo Ongsantipharp, the boy’s father, to discuss the matter. K. Manoo handed them a written request for a speedy inquiry, expressing his concern that the accused would not be brought to justice. “I’m confused about what happened to my son. I feel better that the police have promised to do the best they can for justice. But I will still follow up on what they will do,” K. Manoo said after meeting with the officials. A friend of K. Manoo’s son told reporters that he had been drinking alcohol with the boy and other friends before the group of 10 went to the Monkey Pub. He said that in the pub there was a group of five men sitting about 10 meters away from their table. “They looked furious and walked closer,” he said. “One of them threw a glass of water at us. When [K. Manoo’s son] asked who threw it, one of the men slapped him with a gun. “We didn’t have any problem with them and we didn’t know them. I don’t know why they did that.” Another friend, who was also at the pub, said, “They told us to crouch down, and suddenly we heard a gunshot. Everything happened very quickly. It took no more than a minute. [K. Manoo’s son] was taken to hospital immediately.” Lance Corporal Paradorn Liewwanawat, an officer of the Surat Thani-based Investigation Sub-Division of Provincial Police Region 8, reported to the Phuket Town Police Station over the incident at midday on September 6. L/Cpl Paradorn was in Phuket to provide extra police security during the recent Apec meetings. He is now back in Surat Thani.