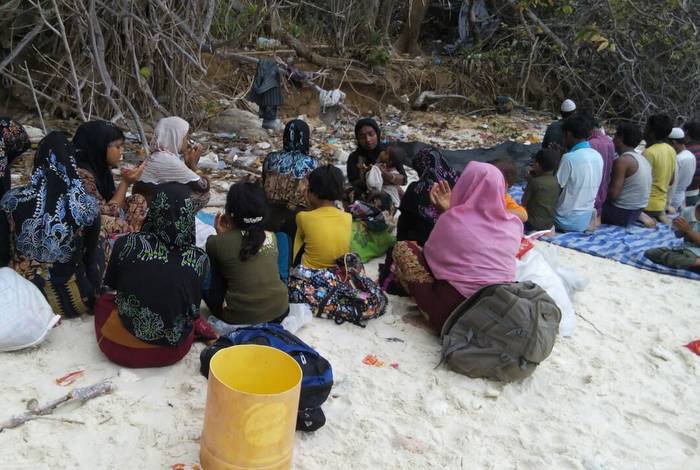 The group – consisting of 89 men, 15 women and two children – was searching for food in the sea when they were spotted by local sea gypsies, who then notified park officers.

“Yesterday evening I received a report from an officer at the Mu Koh Surin National Marine Park that there was a group of people suspected to be Rohingya on Koh Ree,” said Vice Admiral Sayan Prasongsamrej, Commander of the Royal Thai Navy Third Area Command. “We immediately sent officers to investigate.”

When officers arrived, they found the group of people, but no boat and no evidence of a camp having been established in the area.

“We believe that they had not been there for long. We think they might have been dropped off on the island and were to be picked up again later,” said V/Adm Sayan.

“Park officers always keep a close eye on this area, as Mu Koh Surin is near the Thai-Myanmar border and Myanmar islands, and traffickers and illegal migrants often stop over on these islands on their way to their final destination.”

The migrants are being held at Phang Nga Immigration while officers determine where they came from and whether they are victims of human trafficking or if they entered Thailand illegally of their own accord, V/Adm Sayan confirmed this morning.

Marine officials clamp down on IUU fishing in Phuket