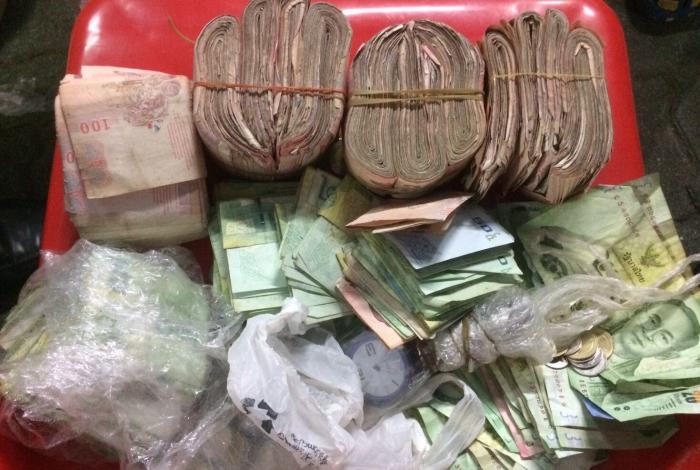 PHUKET: A crippled Thai beggar with a hidden ‘money-belt’ was arrested last night after police received complaints from visitors at the Chalong Temple Fair.

Lt Col Parinya Tanthasuwan of Chalong Police received reports of the 67-year-old man harassing locals and foreigners at about 7pm, and called in Supparuek Pinyo from the Phuket Province Social Development and Society office.

“We first found only a thousand baht on him, but then noticed a bulge around his waist,” the Colonel told Phuket Gazette reporters. “Turns out, he had approximately 100,000 baht wrapped around his waist that he said he’d collected over a few years begging as well as recycling bottles.”

“He also said that he used the money for his hospital bills from time to time, and to take care of himself as he did not want to be a burden on his family.”

He told police that he begs during the day, and at night collects bottles in exchange for money – he then gets his collections exchanged for 100 baht bills.

Col Parinya transferred him to Mr Supparuek’s office so that his family could come and collect him, but not before suggesting to him to open a bank account to keep his money safe.

“If his family doesn’t show, he is free to stay at a shelter.”

The law also provides that genuinely poor beggars or elderly Thai citizens who do not have any means of assistance are transferred to a welfare facility and would not be charged with a crime. Non-Thais and children found begging are dealt with under existing immigration and child welfare laws.