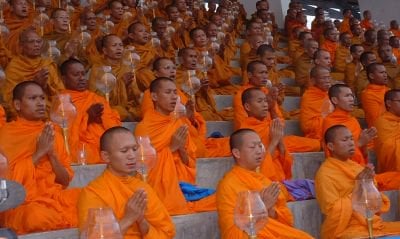 SAPHAN HIN: A somber memorial service for the survivors of the December 26 tsunami was held at Saphan Hin Sports Stadium last night.

The ceremony began with Islamic, Christian and Buddhist services, followed by condolence speeches by Senate President Sukhon Chaleekreua and Wiset Juphibal, President of the Phuket Society, which organized the ceremony.

Listening to them were about 10,000 people dressed in white, many kneeling on the football field in neat rows and each with a glass lantern containing a single candle.

As twilight fell, Interior Minister Bhokin Bhalakula gave his condolence speech to the families of the deceased and then proceeded to light the main lantern, flames from which were passed from person to person until the stadium was illuminated with a yellow glow.

About 100 hot air balloons were also released, as a traditional way of guiding the souls of the departed in the afterlife, after which time the crowd quietly departed