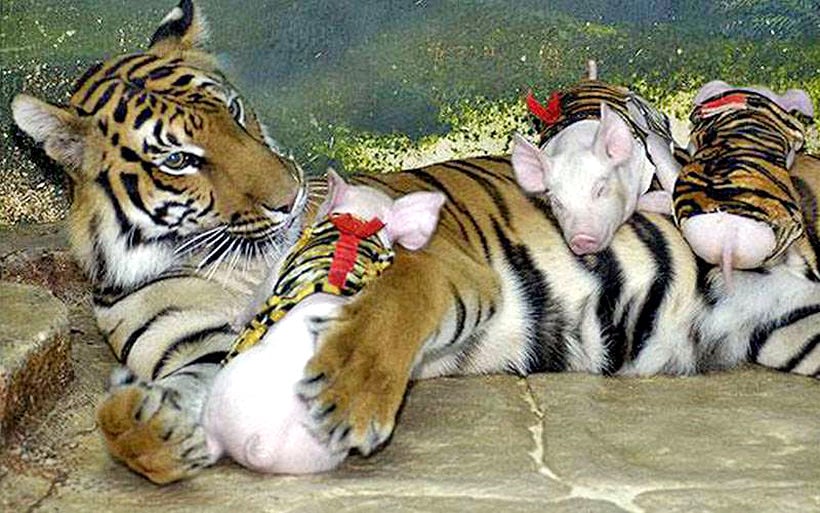 PHOTO: A poster for the "Babysitting Tiger" show at Sriracha Tiger Zoo in Chonburi - Sanook.com

“The show is cruel, affecting those who witness it and it is not appropriate for a zoo to be showing such lack of care for a piglet.”

Netizens were horrified when a tourist posted a short video of a screaming piglet being clawed by a tiger at the Sriracha Tiger Zoo in Chonburi province. Many criticised the zoo, complaining that the show was “inappropriate.”

Matohay Jeharwae, the zoo’s manager, reacted by taking officials from the Sriracha Department of National Parks, Wildlife and Plant Conservation on an inspection tour on Sunday.

The zoo admitted that they put the piglet inside the tiger’s cage as part of a show called “Babysitting Tiger.” Officials ordered the zoo to separate the piglet from the tiger and discontinue the show immediately. The piglet was returned unharmed to a pig farm inside the zoo. A warning was issued stating that should such shows continue, the zoo’s license would be suspended immediately.

“The show is cruel, affecting those who witness it and it is not appropriate for a zoo to be showing such lack of care for a piglet.”

The zoo has posted a sign to inform tourists of the discontinuation of the show.

Matohay says he understands the warning and the zoo will no longer offer such shows and hopes that people are comfortable knowing that the piglets are now safe.