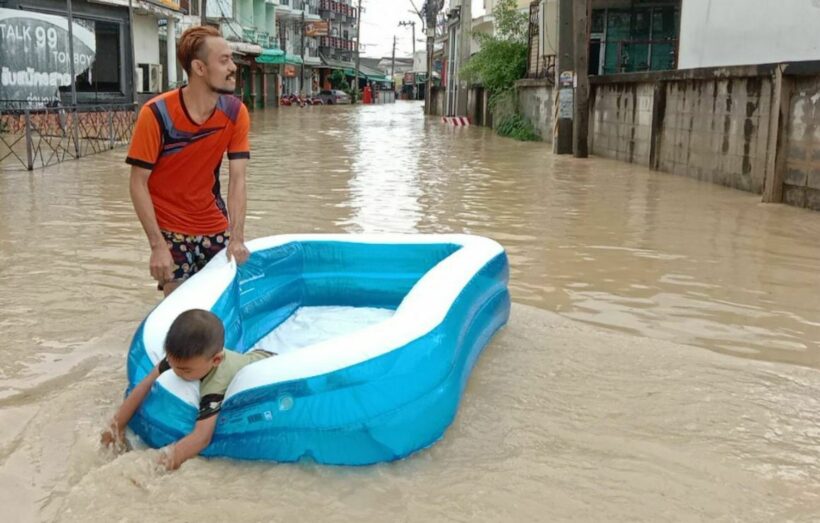 The rains that have been battering Pattaya over the weekend have come with a light side and a dark side. Many locals were seen finding the silver lining in the heavy rains, having fun going with the flow, sometimes literally. But for others, the rains turned deadly.

The rain caused floods on streets and neighbourhoods, dumping water into people homes and damaging or washing away their possessions, and causing traffic back-ups with several vehicles overtaken and stranded with rushing water.

After downpours flooded many parts of the Pattaya area, some locals and expats were spotted breaking out their rafts and boats and floating down the roads-turned-waterways. Some local workers even were able to catch fish and shells that drifted out of overflowing ponds onto the roads. Covid-19 has cost many their jobs and restrictions have shut down pools and beaches, but the rains allowed unemployed workers in Pattaya to catch free food and allowed others to have a bit of water fun they have been denied for weeks.

On the other hand, the heavy rains that have pummelled Pattaya can be dangerous and even deadly in several different ways.

At 1:30 this morning on Soi 3 Amata City industrial estate a pickup truck plunged into a canal after police believe the 31 year old driver lost control from driving too fast on the wet roads. His truck flooded and witnesses pulled him out, but rescue workers were unable to revive him.

Then at 4:30 this morning, a driver on Sukhumvit Road in the Klong Tamru sub-district of Pattaya was thought to have lost control due to the heavy rains and wet roads, possibly slammed into an overpass pillar, and was totalled. It took emergency responders 30 minutes using special equipment to free the 40 year old man from the cab of his car where he was found deceased.

The most bizarre fatality due to the rains in Pattaya this weekend though came Friday afternoon when 2 friends in Sattahip spent the rainy afternoon drinking heavily as the floodwater grew. They drank to the point that a swimming competition through side by side drainage pipes that run under the main road seemed like a good idea.

Each man swam into one of the drainage pipes that were full of rushing water but only one man made it out the other side. The surviving man said his friend was usually a good swimmer but was likely too impaired by alcohol to make it through the pipe to safety.

No charges are likely to be filed in the event but Sattahip police issued the seemingly obvious warning against swimming in drain pipes, especially during floods.

kerryd
The reality is, we need these rains, and more of them. The reservoirs have been at extremely low levels for a couple years now. We had water pressure reductions and cut-offs last year, even though there were no tourists, because…
Leeshard
So what was the point of those massive road works over the last 2 years installing huge new storm drains under Pattaya’s roads?  An hour’s heavy rain and we just get the same old problem.
Paco
I will not be standing in that water.. full of rats... aagghhhh, well at least it shows and proofs that the mayor of pattaya did not do anything good besides probably, keeping himself some of the funds for that project

AlexPTY
And the Darwin award goes to...

Shane
Drunken game's of the kwok. Only one made it out. Not a good idea.