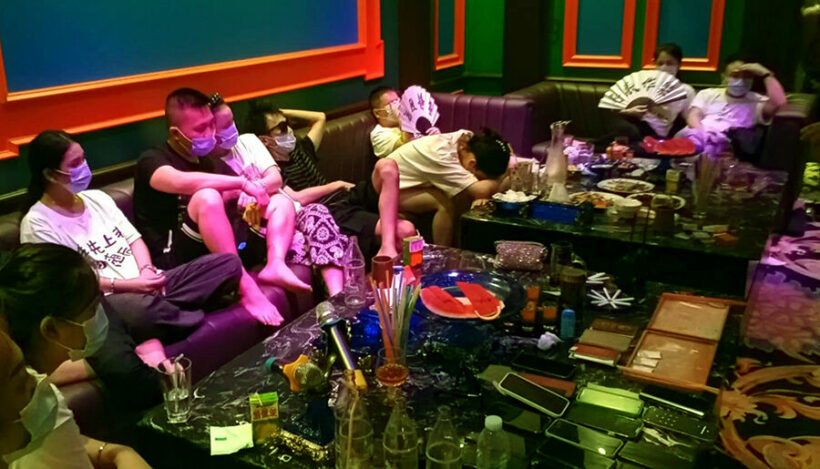 PHOTO: Another drug party busted in Pattaya - The Pattaya News.

After Pattaya police cracked down on people dealing the drug cocktail ‘happy water‘ last week, this morning they busted an alleged ‘Ketamine’ party. Officers say the substance needed to be tested before they could confirm exactly what it was, though. Officers from Pattaya Police found 16 people at the party including 5 Chinese men, 3 Chinese women, 1 Burmese man, 5 Burmese women and 2 Thais.

The 16 were reportedly in a large room with lounge-style lights, karaoke equipment, and sound equipment, as well as the substance suspected to be Ketamine. Pattaya Police are also investigating the venue where the group was found for possible rule violations. This includes a rule that entertainment venues like karaoke lounges have to be converted into ‘restaurants’, and be registered, if they want to remain open. The current legal closing time for converted restaurants is 11pm, and the group was busted at 4:30am.

Officers took all the foreigners from the party to the Chonburi Immigration Office for drug testing and further legal actions, while they brought the Thais at the party to the Pattaya Police Station.

The venue was located in Nong Prue municipality in the Bang Lamung district of Chon Buri province.

Last week, police in Pattaya stepped up their efforts to crack down on another drug, a cocktail called ‘happy water’. The chief of the Narcotics Suppression Bureau said happy water is usually made by combining ecstasy, methamphetamine, diazepam, caffeine and painkillers, mixed into a curious liquid cocktail with hot water and mixing it with sweetened drinks.

NSB officers arrested a man for allegedly colluding in trafficking the brew. His role was to deliver it to customers at local nightspots. The NSB chief alleges the man confessed to the charges.

Fanta
2 minutes ago, TheDirtyDurian said: We got a campaigner! Just pointing out that this is not just a minor snort session in a karaoke lounge. They would have been better off snorting coke off hookers stomachs. Heroin, meth, ketamine, disco…
Rookiescot
8 minutes ago, TheDirtyDurian said: To paralise them so they do the starfish? Sounds great......🤔 I cant say it would do much for me either but I am a puritanical Protestant Scotsman so even having the lights on is a…

AussieBaz
The Thailand authorities want more Chinese tourists than anyone else when the majority knows that they are also high on the drug-using list.

Poolie
1 hour ago, AussieBaz said: The Thailand authorities want more Chinese tourists than anyone else when the majority knows that they are also high on the drug-using list. Really? Who said?
vlad
Why do we never hear what sentences or fines that were distributed by the Courts to show what they will receive if they think about throwing one of these part'y Seams the sentence is not a deterrent as they carry…