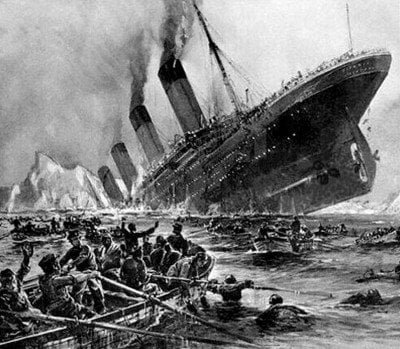 PHUKET: This week’s Weird World News roundup is a tribute to the titanic accomplishments of vehicles as a big boat is redesigned to handle icebergs, a new motorized toilet speed record is set and BMW gets a stiff lawsuit for its motorbike allegedly causing a two-year long erection.

Unsinkable – isn’t that what they said the first time?

An Australian billionaire has signed a memorandum of understanding with a Chinese company to tempt fate as they go about designing and building the “unsinkable” Titanic II, reports Reuters.

A century since the original Titanic struck an iceberg and sank into the Atlantic, leaving 1,517 passengers and crew members dead, mining and tourism tycoon Cliver Palmer has decided to build the unthinkable, another Titanic.

“It’s going to be designed so it won’t sink,” Mr Palmer told reporters. “It will be designed as a modern ship with all the technology to ensure that doesn’t happen again.”

However, the new Titanic will have the same dimensions as its predecessor with 849 rooms and nine decks.

Titanic II is expected to make its maiden voyage from England to North America, the old Titanic route, in late 2016, Reuters reported.

A new land-speed record was set last week in Australia as Jolene Van Vugt squatted on some porcelain and took the toilet to a whopping 74 kilometers an hour, reported The Mirror.

“I flew into Australia yesterday [April 31] and came out here to jump straight on the toilet,” said Ms Vugt.

The 31-year-old former motocross champion now has another feather in her cap as she adds the Guinness world record for fastest motorized toilet to her list of accomplishments.

“That was so fun and I’m stoked to get the record,” she said.

To set the record Ms Vugt took two runs on the toilet and the results were averaged together.

Though some maybe poo-pooing Ms Vugt’s most recent accomplishment, it should be noted that she was also the first woman to complete a backflip on a dirt bike.

A man in the US is suing BMW after his motorbike’s “ridge-like seat” left him an unrelenting erection that stuck around for two years, reported The Mirror.

Henry Wolf claims that a two-hour ride through San Francisco and back in May 2010 left him suffering from priapism.

In the lawsuit Mr Wolf states “[he is] now unable to engage in sexual activity, which is causing him substantial emotional and mental anguish”.

Priapism is a potentially painful medical condition, in which an erect penis or clitoris will not become flaccid (generally last longer than four hours), despite the absence of both physical and psychological stimulation.

The claim was filed with the California Superior Court and alleged that the “negligently designed” seat was responsible for triggering the condition.

Mr Wolf has refitted is 1993 MBW motorbike with a more comfortable seat, but claims that his condition is still making life hard.