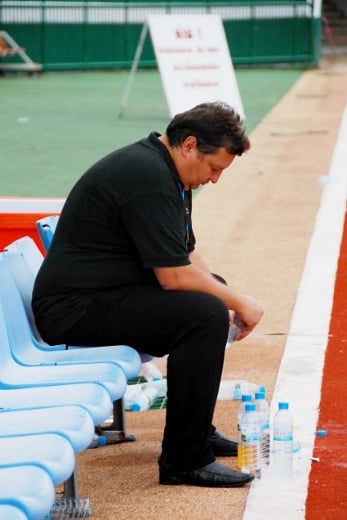 PHUKET: FC Phuket suffered their third loss of the season, losing 1-0 to the Saraburi FC “Warlords” on Saturday afternoon at Surakul Stadium.

The loss was a disappointment for the Southern Sea Kirin, who hit the road to kick off their Thai FA Cup campaign this week.

An early goal by Saraburi’s Panuwat Promyen was all that was needed to secure the win and move his side past FC Phuket in the league table after eight weeks of play in Thai League Division 1.

Despite the early deficit, a determined FC Phuket dominated possession throughout most of the match, and developed a number of good opportunities to equalize, but failed to convert.

Commendable drives by Phuket’s Ibrahim Kanoute, Seongwon Byeon, Watcharapong Jun-ngam and Porimat Krongborisut kept the pressure on Saraburi’s defenses high, bringing the crowd, capped at just over 1,100, to its toes with a number of shots on goal.

The loss plummets Phuket to 17th in the 18-team bracket, with just 7 points from a single win and four draws.

Saraburi moved into 14th place with their second win, adding to two draws and four losses.

Though the season still has 26 fixtures to go, Phuket are looking gloomily towards relegation if they are unable to turn their luck around. They are among three teams that have yet to record a home win. Not surprisingly, all three occupy the bottom places on the table.

This year, five teams will be relegated from Division 1 instead of the usual four, as a two-season competition ban on Nakhon Pathom FC is set to expire at the end of the season.

The Thai Premiere league banned Nakhon Pathom FC for two seasons after it was deemed responsible for a fan riot that erupted on the pitch after a failed playoff promotion match in 2010 against Sri Saket.

Nakhon Pathom will resume play in the Thai first division next season.

Pattalung are stable in 8th place after drawing powerhouse newcomers Ratchaburi in an away match 1-1, while Songkhla move up into 5th place following a solid home victory over Nakhon Ratchasima 2-0.

Other Thai Yamaha 1 results over the weekend are as follows:

Phuket now hit the road to to kickoff their 2012-2013 Thai FA Cup campaign, starting with an away fixture on Wednesday against Division 2 side Trat FC.

In other matches involving southern region teams the same day, Pattalung will host Suphanburi. Songkhla will play an away at Air Force United, and division 2 Southern side Hat Yai FC will take on Krung Thonburi FC.

With little time to rest and recover, Phuket will return to league action this Sunday with an away match against Southern region rivals Pattalung FC.

Kick off for that match, to be played at Pattalung Central Sports Stadium, will be at 6pm.