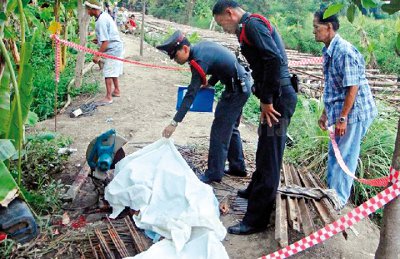 A MENTALLY-ill man killed himself on a building site by pushing a rotating saw into his own neck, police said.

Saemdam Police were called to the scene in Bang Khun Thian district in Bangkok after the body of Ek Boonmee, 34, was found next to the saw.

Mr Ek’s father, Nawi Boon-mee, 56, told police that his son suffered from mental health problems as a result of a ya bah (methamphetamine) addiction when he was a teenager.

Mr Ek used the drug for six years from the age of 14 to 20. He was left with mental health problems, forcing him to take medication and attend regular checkups in the hospital, Mr Nawi said.

About two days before his death, his medication ran out, leaving Mr Ek in an agitated state.

He reportedly complained to co-workers that there was something stuck in his neck, making it uncomfortable for him to swallow.

While alone at his workplace, Mr Ek lay on the ground and pushed the saw into his neck, killing himself, police believe.