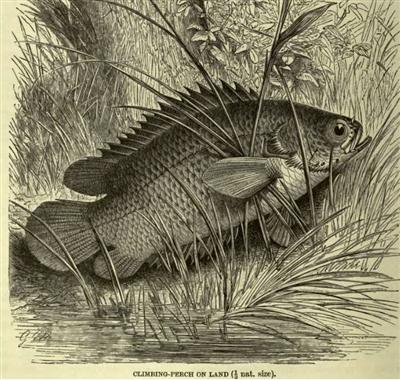 PHUKET: Doctors in Pichit Hospital were presented with a medical conundrum on March 25, when an eight-year-old boy was brought in with a climbing perch stuck up his bottom.

The boy, whose name was given in media reports but is omitted here, was carried into the hospital by his 60-year-old grandmother.

The boy told doctors that on the way home from school he and some friends saw a great number of climbing perch splashing in the mud of a nearly dried-out pond.

Seizing the rare opportunity, the boys stripped off and jumped in to catch the fish.

As the boy was grabbing them, he felt something push into his rectum. Using his hands to feel what was causing the unpleasant sensation, he felt the tail fins of a wriggling fish sticking out of his anus. Before he could do anything, however, the little fish lived up to its name and climbed up all the way into darkness.

The boy shouted for his friends to get help, and his grandmother arrived and rushed him to hospital.

Hospital doctors X-rayed the hapless child who was by then in considerable pain from the sharp spines and fins of the little fish thrashing inside him.

On the X-ray, doctors saw the intruder, about two or three centimeters long, lodged in the entrance to his lower intestine.

Led by Deputy Hospital Director Dr Suchat Thepharak, a team of three doctors held a brainstorming session to decide how to proceed with the delicate removal operation, which was much complicated by the sharp spines of the climbing perch.

With the perch facing forward, extracting it tail first would risk the spines or fins piercing the boy’s intestinal wall. The situation was further exacerbated by the fact that the hardy little fish continued unabated in its wriggling struggle for existence.

A frantic search for research papers on similar cases proved fruitless: this was apparently the first case of a perch climbing up someone’s rectum in Thailand – and possibly the world.

Doctors first considered pumping anesthetic gas up the boy’s bottom to knock out the fish, making its retrieval easier. After this plan was dismissed for safety reasons, Dr Bussakon Wangphayon suggested injecting the fish with anesthetic by sticking a needle up the boy’s rectum, then extracting the spiny intruder with forceps.

If this plan failed, open surgery would be the only remaining option, the doctors concluded.

Deciding to go ahead with the injection, the doctors managed to knock the fish out. Then, in a delicate two-hour procedure, they extracted the fish with forceps while continually pushing the spines inward to prevent them from lodging inside the boy.

At the end of the operation the boy was reported in stable condition, but requiring extended observation owing to the risk of infection.

Asked about the experience, the boy said he thought he’d not go fishing again.

Ministry of Public Health Spokesman Dr Suphan Srithamma advised that when swimming in bodies of water that have small animals like fish and leeches capable of entering through an orifice – especially the anus – people should be sure to wear tight-fitting underwear.

If something unexpected should happen, try to keep as still as possible to prevent it from climbing further up; then get to hospital as fast as possible.

Climbing perch, also known as climbing gouramies, are able to climb out of water and travel short distances on land using gill plates, fins and tail. Their ability to survive on atmospheric oxygen allows them to survive out of water – even up an inhospitable rectum – for some time in search of a new aquatic home.