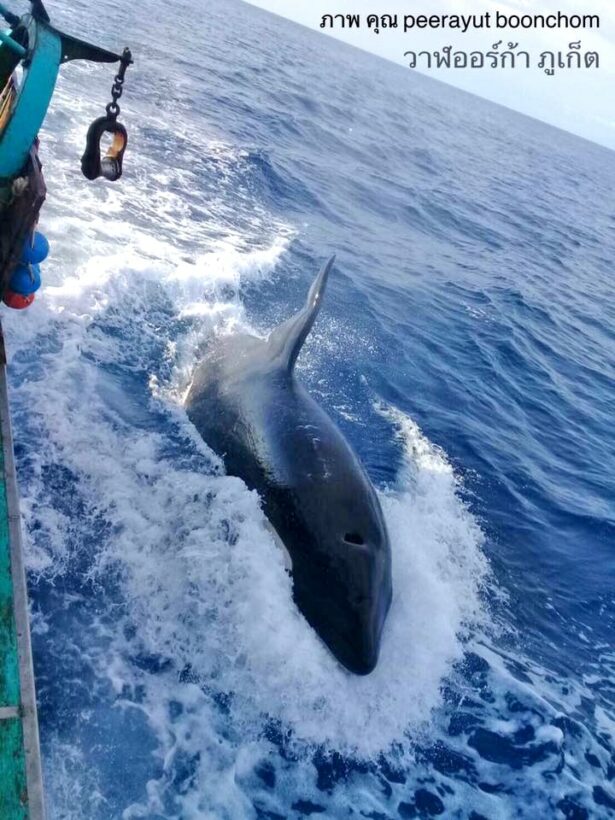 The Orca aka “Killer Whale” has been spotted in the sea on the west coast of Phuket. The VDO and picture were captured by the Facebook user named “Phairot Kong.”

For this impressive discovery, Dr. Thon Thamrongnawasawat, a marine activist, the Deputy Dean of the Faculty of Fishery at Kasetsart University and an official advisor to the Department of Marine and Coastal Resources (DMCR) commented that this type of whale has been spotted for the past 20 years in Thailand.

People often misunderstand that the orca whales can only be found at the poles but they actually live in the tropical areas as well and hunt different types of food.

The ones living at the poles hunt for seal while the group living in the middle of the ocean hunt for baby whales and dolphins and those living in the tropical zone hunt for sharks and rays.

The Orca male can grow up to 6-8 meters long with a weight of 3-4 tons. They usually stay in a group of 5 – 6 or more. The orca is the fastest mammal in the sea and can swim faster than 50 km/hour.

“I used to dive in Papua New Guinea which was hotter than Thailand and the orcas living nearby always swam back to the same spot hunting sharks,” Dr.Thon said.

“In Thailand, there’s a report about orcas being found near the Similan Islands about 20 years ago and there were some people continuously spotting the orcas over the past few years.”

“Though they are a carnivore hunting animal there’s no record of killer whales attacking human before. The orcas in this area usually hunt for sharks and rays. There’s nothing to be worried about but we should be glad that this group of whale remain in Thai sea and come back to visit Phuket from time to time,” he added.