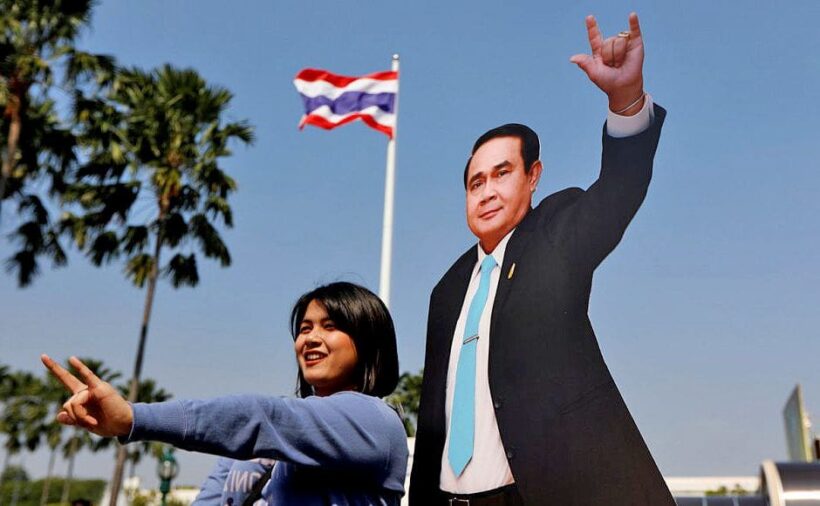 The views of the writer do not necessarily reflect the views of The Thaiger or its business partners.

Since it was first formed in 2008, along with the previous incarnations that swept Thaksin Shinawatra to power in the early 2000s, the Pheu Thai party has remained the dominant force in Thai politics. In 2011 it brought Thaksin’s sister Yingluck to the prime minster’s desk. But a coup in 2014 swept the elected government out of office citing dangerous street protests that had broken out between the Red Shirts (Thaksin sympathisers, mostly representing the populous north and north-east regions) and Yellow Shirts (Bangkok elite, ‘monarchists’ and southern provinces)*.

The maths are quite simple. All things being equal, the Pheu Thai and pro-Thaksin parties would win the March 24 election by sheer weight of numbers of the country’s north-of-Bangkok population base.

But the military have shown that they will stop at nothing to reduce the possibility of Pheu Thai winning another election. They’ve changed the country’s constitution, electoral system and run a, nearly, five year campaign of one-sided propaganda to ensure that a military-sympathetic government, and PM, will rule when the dust settles on the March 24 vote.

The Thai Raksa Chart Party was set up to ‘manipulate’ the new proportional voting system for the country’s lower house of parliament. Early polls showed that the combined power of Pheu Thai and Thai Raksa Chart parties, plus support from a few other minor pro-Thaksin parties, would likely give it the magic 376 MPs to command a majority and form the next government.

With the Constitutional Court disbanding Thai Raksa Chart and banning it’s MPs from forming new parties, a Pheu Thai victory is much, MUCH, more difficult. Taking advantage of the new proportional electoral system Pheu Thai only fielded candidates in 250 constituencies with Thai Raksa Chart fielding MPs in other electorates .

The Pheu Thai-led alliance still needs 376 MPs to regain political power, but it will have to win big and the votes fall their way under the new proportional system.

The mountain to climb has got a lot steeper.

To simplify an extremely complex electoral situation, you can break down the three ‘camps’ into the pro-military parties, the pro-Thaksin parties and the Democrats (and others).

According to recent polls the Pheu Thai party will win the largest share of electorates in the country, hands down. Second, a long way back, will be the Democrats (popular in the capital and southern provinces), the Phalang Pracharat party (with Prayut Chan-o-cha as its PM candidate) in third place and the new Future Forward party drawing the fourth largest block of votes (they have certainly emerged as the rising stars!).

It is statistically likely, actually highly likely, that no party will win a majority (376 seats) in the lower house of Parliament. So the phones will be running hot post March 24 as parties negotiate to form a workable coalition. The most obvious coalition, but historically unlikely, would be all the pro-Thaksin parties putting their numbers together with the Democrats – traditionally political enemies but both hell-bent in getting the military out of politics.

But TIT, it’s Thai politics and, really, anything could happen.

Proportional Voting System: All ballots cast for all parties will be counted together and calculated into the number of seats each party gets out of 500. If it is figured out that Party A gets 200 seats and it already wins 190 constituency seats in the election, it will get an additional 10 seats.

• The Palang Pracharat Party, which has Gen Prayut Chan-o-cha as its prime minister candidate, can get several seats without having to win at any constituency (under the new proportional voting system), not least because it has taken many northern and northeastern veterans under its wings.

• If a party has a lot of constituency MPs, it will have a disadvantage when it comes to getting MPs from the proportional system.

• Thai Raksa Chart branched out from Pheu Thai allegedly out of hope that “many are better than one”. The “satellite parties” do not need to win at constituencies, but they should be popular enough to gain substantial votes.

In short, Pheu Thai and its allies need a groundswell of public sympathy in the remaining two weeks. Previously hated by non-Pheu Thai voters, the ‘reds’ have become the underdogs and are getting back-handed support simply by being anti-military.

The court’s short but eloquent ruling dissolving Thai Raksa Chart will be weighed against the emotional goodbye message of the party’s leader and the outcome of that will influence voters.

Whatever happens on March 24, and the final make up of the lower house, the NCPO have ‘rigged’ the parliamentary upper house (the NLA) with military-sympathetic Senators who are all appointed.

A coalition of non-military parties will form the next government post March 24. Because no single party will win a majority of seats and select their own Prime Minister, the two houses of parliament will sit to elect an ‘outsider’ PM.

That ‘outsider’ will likely be (roll the drums), Prayut Chan-o-cha.

Then a ‘rubber-stamp’ upper house will continue the conservative work of the past military government amid a whole new raft of daily political squabbles.

But March 24 is still two weeks away and more surprises are likely. TIT.

* Our broad definitions of Red and Yellow shirts are VERY general