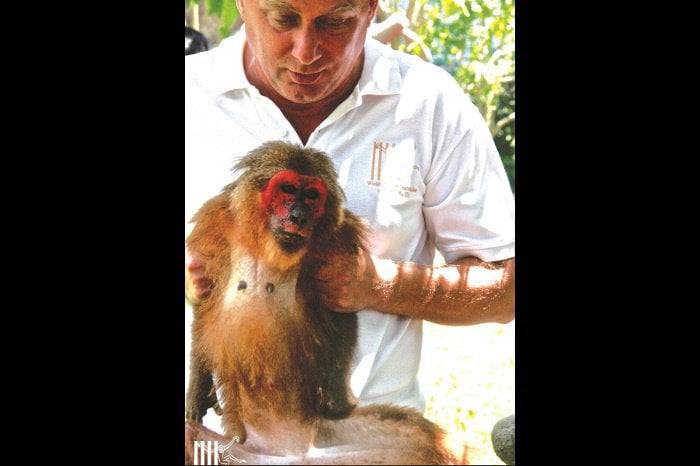 Edwin Wiek is founder and director of the Wildlife Friends Foundation Thailand (WFFT), an NGO protecting wildlife and nature in Thailand and Laos. He has been living in Thailand since 1989 and in 2001, founded WFFT. Here he talks about the mammoth problems facing wildlife protection forces, including systematic corruption at local level.

PHUKET: While most people visit Phuket for leisure, a weekend away or a long beach vacation, I am one of the few unlucky ones who only visit Phuket when there is trouble. Trouble with animals or nature that is.

In the last few years, I visited Phuket at least two to three times a year, whether it was to campaign against the opening of different dolphin attractions, the parading of protected wildlife by scrupulous touts, or to witness the eviction of encroachers from National Park areas. Somehow it seems that the growth of Phuket as a world-class holiday destination has to go at a cost to the environment, natural resources and wildlife. Thailand’s laws on the protection of nature and wildlife are fairly well written up, but it is clear that enforcement has been lacking – big time.

The days that you had to drive through a thick forest to get to Patong from Phuket Town are long gone,

although on the tops of the mountains and hills, you can still see large green patches and tall trees. The villa parks and bungalows, however, have slowly eaten into both sides of these hills and here and there you can see land clearings and buildings moving further up. As far as I remember, these were protected forest areas only 10 years ago – and should still be now.

Fifteen years ago, there were hardly any touts parading protected wildlife around the tourist areas such as gibbons, langurs, snakes and lorises. However, in the last few years, they have been coming and going – openly harassing tourists and pushing them to take photos with a little monkey or other protected wild animals. Obviously the local law enforcement officers are aware that these touts act illegally, as we – in our capacity as a wildlife protection agency – have sent numerous complaints to them about the situation. However, there has been very little change.

Sirinart National Park is probably best known to the people of Phuket, because of the many scandals involving illegal occupation of its land and encroachment by influential people. Not many know about its bio-diversity; the mangrove forests it houses and the fact that sea turtles used to come up to it’s beaches to lay their eggs. I witnessed several eviction orders by government officials of restaurant owners and small shops on the beaches and read in the newspapers about investigations into the encroachment of five-star resorts into park areas. But to date, I have not seen any of these companies evicted from these areas, despite obvious encroachment.

I am not sketching a very nice portrait of Phuket above, but I am left wondering why laws that are so clearly written can be enforced elsewhere in Thailand, but yet seem to be ignored and laughed at in Phuket? When I met the former police chief of Patong in February 2013 about the touts on the beaches with protected wildlife, he bluntly told me I made things up – that there were no people parading around wild animals on Bangla Road. Indeed, that next night the streets were empty – case closed. Three days later a man with a baby gibbon in front of a disco on the beach road in Patong told me he paid 500 baht a day to be licensed to walk around with wild animals.

In 2010, I asked the provincial forestry director to confiscate 12 orangutans from a zoo without a license. Three days later, he miraculously provided that license and asked me to come and see it the week after. Again, case closed. I am afraid that those encroaching on national park land might soon find their title deeds legal, as large sums of money are involved – yet another case closed. I am holding my breath.

Phuket is still a beautiful island, with great hotels, resorts and entertaining attractions, but also with an amazing coastline and stunning green forest areas. It is the combination of luxury and nature that attracts lots of people to the island. The infrastructure can hardly handle the amount of tourists in some areas, and as more green jungle is lost, it won’t be long before it’s replaced by a concrete one.

Somehow it all has to stop. If officials enforce existing laws it still can.

For more information on the work of WFFT visit: www.wfft.org