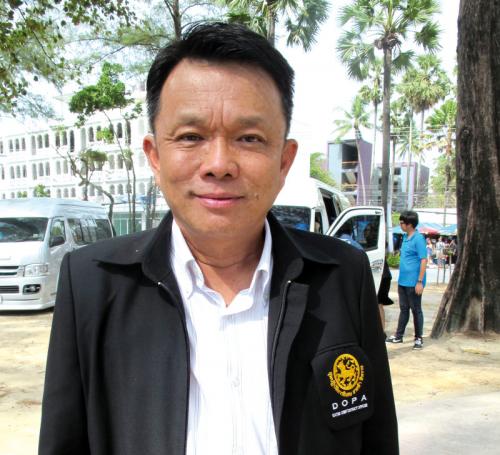 Veera Kerdsirimongkol, 57, originally from Nakhon Si Thammarat, has been District Chief of Kathu for four months. He was a district chief for 13 years before coming to Phuket, most recently in Palian, Trang. He has a master’s degree in Management Sciences from Prince of Songkla University.

Here, he talks about what he has done to stop illegal activity in Kathu, and his plans for the future.

PHUKET: My work as District Chief is focused on reducing illegal activity, and my goal is to bring Phuket people back to a legal way of doing things. It’s relatively easy to prevent new problems, but quite difficult to solve entrenched ones. My philosophy is to be flexible with old problems and not allow new ones.

I’ve only been here four months, but I’ve been busy dealing with a variety of issues in Kathu, such as illegal logging, illegal land possession and drugs.

The first problem I tackled was land encroachment, such as building on protected forest areas. We took action and made a number of arrests, especially on Kamala Hill.

I can say that right now in Kathu, we have dealt with all the new land encroachment cases.

However, land that was taken illegally in the past and already has buildings constructed on it is a lot more difficult to deal with. It requires going through a detailed and lengthy legal process, checking land possession documents, construction permits and so on. It can take eight to 10 years to finish a single case. That process is out of my hands.

To deal with the drug problem, I am using the same strategy I used successfully in Trang.

I set up special teams of officers and volunteers to man checkpoints and conduct raids. Our team in Kathu is called “Siharat”. We’ve already set up checkpoints and arrested a lot of drug users and dealers.

These checkpoints will be ongoing, at a variety of locations and times. My officers will be relentless in pursuing and arresting offenders – there will be zero tolerance for drugs and absolutely no under-the-table money accepted.

My next project is the Patong Beach “free zone” (see here). I want to make about 500 meters of Patong Beach free of all businesses (map here).

This would mean no hawkers, no sun bed operators – no businesses at all on the beach. Then anyone could use it without being hassled to buy something, and tourists could sit down freely wherever they liked.

I’ve already passed along my request to Patong Municipality, the police and other government officers and gotten good feedback and support. I want to ask one of the local universities to create a poll to find out what local residents think.

After that, the next step would be checking which businesses would be affected and thinking about other employment for people who will be displaced.

This project is going to take some time. The beach operators have been there a long time and it’s difficult to move them.

The important thing to remember is that beaches in Thailand are public and free for everyone to use.

The strict stance that I’m taking is going to upset some people – the people who are doing things illegally and have lost money because of me.

These people want to replace the rule of law with mob rule, which means that if they don’t like something, or something makes them lose money, they protest. They think that by protesting, they can continue doing things illegally.

But I’m going to continue doing what I’ve been doing – pursuing illegal activity and putting a stop to it. My goal is to make Kathu District a legal place.

I need the help of everyone, residents and tourists alike, to inform me about illegal activities in Kathu. You can come to our office on Vichitsongkarm Road to file a report or talk to me directly.

Phuket Opinion: Waste not, and waste not wanted