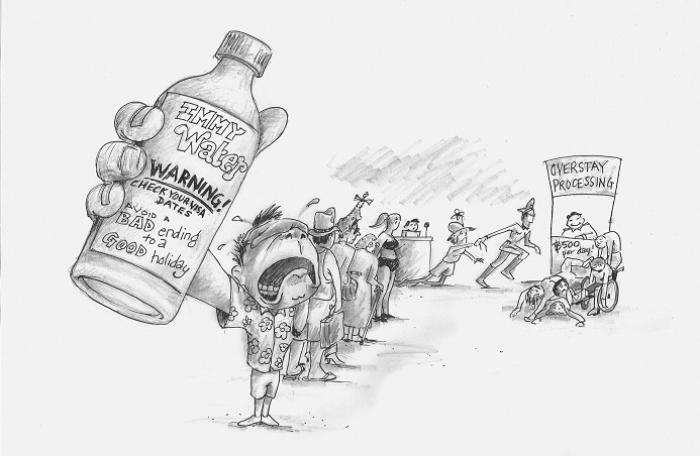 PHUKET: The recent push to publicize the need for foreign tourists not to overstay their visas is long overdue, but we hope the Immigration Bureau will use its sweeping powers in fair and compassionate ways that consider extenuating circumstances – especially those involving victims of accidents or crime.

The crackdown, which actually comprises little more than stricter enforcement of existing policy on overstays, is ostensibly intended to protect Thailand and its citizens from unwanted foreign elements.

Thailand has long sought to attract more quality tourists, a term that implies visitors who not only abide by immigration rules, but also pump a lot of money into the local economy during their limited stays.

In reality, most overstays are not the result of nefarious motives, but are rather due to ignorance, negligence or simple bad planning. Every Phuket Immigration Police volunteer knows just how many overstay cases only come to light at Phuket Airport. This is where so many hapless violators realize, to their horror, that they have overstayed their legal welcome and are subject to fines of 500 baht a day.

Those who have partied away their holiday budgets and cannot afford to pay up risk not only missing their return flights, but the prospect of being stuck inside a foreign country with mounting overstay penalties, legal charges and possible imprisonment – a nightmare ending for what could have been a ‘happy ending’ sojourn here in the Land of Smiles.

The Ministry of Foreign Affairs (MFA), which issues the visas, is keenly aware of the overstay problem. Its website offers the following practical advice: “No matter how you plan your upcoming excursions and adventures in Thailand, don’t forget one thing: avoid overstaying your visa. One of the worst mistakes an alien could ever make is overstaying their visa due to ignorance or just sheer lack of knowledge regarding Thai visa rules and regulations. It’s much better to be denied entry than [to] be imprisoned and denied your freedom at [sic] a country you don’t really belong into [sic].”

Unfortunately, too many holiday makers spend more time doing internet research into the relative merits of Phuket versus Pattaya than they do perusing the MFA website for immigration information.

All the information needed is stamped into passports with a warning that reads: “Holder must leave the Kingdom within the date specified herein. Offenders will be prosecuted.” Additionally, expiration dates are stamped into passports in bright red letters. Yet for all this, many visitors fail to examine their passports after their permits have been issued.

Immigration’s latest publicity effort involves printing out possible penalties on disposable plastic water bottles [yes, our cartoon is serious]. It remains to be seen how effective that will be. Meanwhile, we ask our readers to help out in the effort by asking neophyte tourists the simple question: ‘When does your permit to stay expire?’ While the question might seem somewhat invasive, it could also save the tourist from a possible nightmare here.