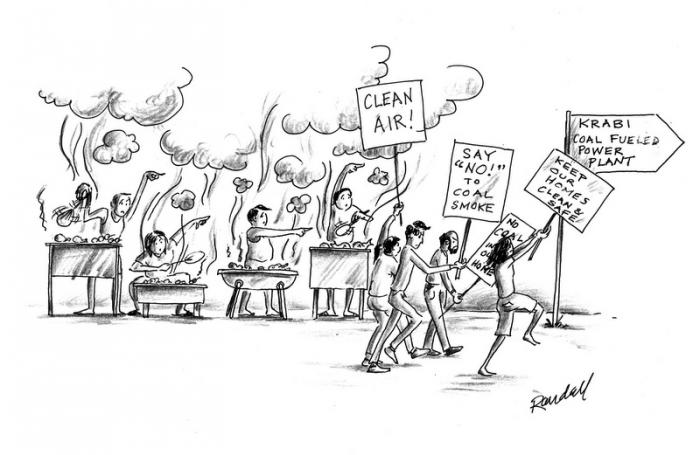 PHUKET: Recent protests against construction of the proposed coal burning electricity generating plant in Krabi is a classic case of the NIMBY (‘Not In My Back Yard’) phenomenon, and one which is also seriously testing the government’s resolve over the public’s right to protest.

It is difficult to believe that the year is 2017 and we are still burning coal, which conjures up bleak images of sooty, impoverished child laborers from the time of the industrial revolution.

Yet three centuries – and a great deal of global warming and several nuclear meltdowns later – we are still relying on coal for our power needs.

Proponents point out that coal is still a relatively cheap and efficient source of fuel and that considerable progress has been made in reducing its environmental impacts, especially air and water pollution. Unfortunately, the so-called ‘clean coal’ we have all heard so much about is still a long way down the road and only reduces, but does not eliminate toxic emissions.

Coal burning generates more pollution than any other standard fuel source and is a huge contributor to global warming by pumping enormous amounts of not only carbon dioxide, but also the worst of all greenhouse gasses, methane, into the air.

Residents of Nua Khlong in Krabi, the proposed site of the plant, cannot be blamed for mobilizing and protesting against such a facility in their area.

It might be a bit of a stretch to argue that Krabi’s ‘pristine’ natural environment would be threatened by such a plant when, in fact, most of the province has been in a state of degradation for decades as a result of unsustainable development associated with the tourism industry boom, as well as the vast rubber and palm oil plantations that actually make up most of the rural landscape in the South.

The government has agreed to review the project’s environmental impact report, but maintains that the project will eventually become a reality in some form.

The government needs to rethink its devotion to such a filthy and outdated technology and seriously push for more alternative sources of power, such as producing bio-gas from left over biomass from palm and rubber plantations.

Ministry of Farang Affairs: Why Thai kids are scared