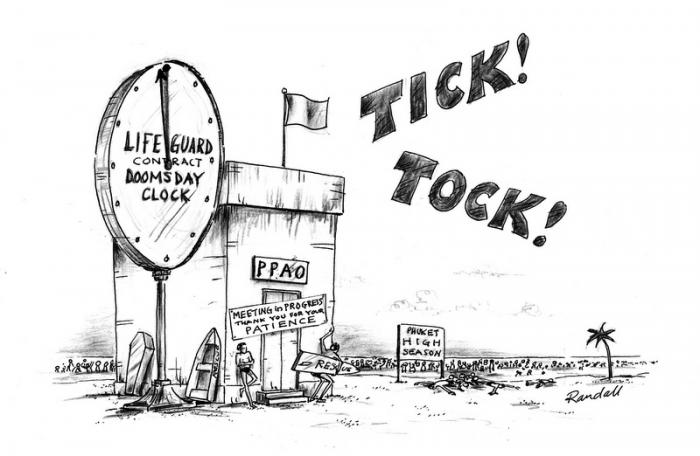 PHUKET: IT IS reassuring to know that lifeguard services will continue uninterrupted at popular Phuket beaches this year (story here), but we still need to do a better job of publicizing beach safety risks.

The pending contract agreement between the Phuket Lifeguard Club (PLC) and the Phuket Provincial Administration Organization (PPAO) will continue to minimize the number of preventable drowning deaths of the kind that are reported far too frequently here each monsoon season.

It is not clear why the PPAO insists on cutting expenditure to the PLC, but it is nice to see a government body insist on getting the most for its investment of taxpayers’ money for a change. Many local administrative bodies on the island squander public funds on frivolous projects that have more to do with self-promotion than public safety.

If provision of lifeguard services were left to them, the beach safety situation would rapidly deteriorate into the same type of embarrassment that we have seen in public transport, the illegal divvying up of beach land for commercial purposes, and so on.

Of course, no number of lifeguards will ever be able reduce the number of drowning deaths to zero when overconfidence and a lack of awareness of the dangers posed by rip-currents persist, especially among foreign tourists.

Much needs to be done to bring the island’s lifeguarding services up to international standards, but it might not be so easy given that lifeguards’ monthly salaries start at just 12,000 baht, forcing many to seek supplemental income streams just to get by.

Another area that needs to be considered is investing in more water craft to help guards get to drowning victims before it’s too late. While the island’s notorious jet-ski syndicates have done so much to harm Phuket’s reputation, the Gazette recognizes that they have rescued several distressed swimmers over the years.

Despite years of futile editorializing in this space, it appears that jet-skis are here to stay in Phuket. Given that fact, perhaps it is time to train them and perhaps give them a more formal role in the beach safety effort.