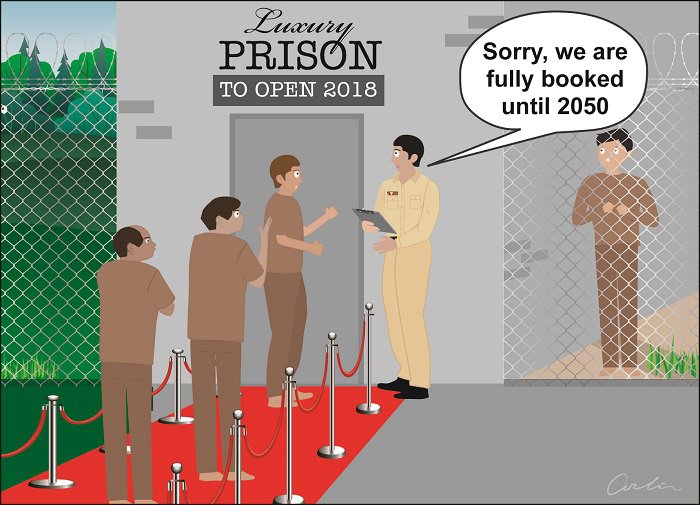 PHUKET: Credit is owed to the government for finally coming through with funding to build a much-needed and long overdue new prison for Phuket.

It is well known that the existing Phuket Provincial Prison is dangerously overcrowded. With a maximum capacity of just 800, the 115-year-old facility currently holds more than 3,000 inmates – a recipe for disaster if ever there were one.

Considering the harsh conditions, Phuket Provincial Prison Chief Pichit Wanajit and his wardens deserve a great deal of praise for somehow having avoided any major disturbances.

Whether staff at Phuket Prison can keep this positive track record going until the new prison is completed in 2018 is anyone’s guess, especially as the prison population there appears to be ever-increasing.

Though the Gazette agrees with the decision to house only male prisoners at the new facility and keep female inmates at the current facility, another idea deserves careful consideration. The old prison should be used as a ‘remand facility’, one which detains suspects whose cases are still being tried and who have not yet been convicted.

In most prison systems, the adage ‘innocent until proven guilty’ is reflected in the detention system and suspects still on trial are held separately from convicts.

Using the existing prison as a remand facility would eliminate the need to truck male suspects all the way back downtown for court hearings, which would only add more daily traffic to our already overcrowded streets.

While considerably less than the amount previously announced, the 796-million-baht budget for construction of the prison should be enough to build a facility capable not only of detaining inmates in a more humane manner, but also of providing more room for vocational training classes to help inmates cope with the daunting reality of rejoining society.

From a broader perspective, the government should take a hard look at the make up of the prison population nationwide and ask itself how many of those incarcerated truly pose a threat to society. About three-quarters of inmates in most provincial prisons are in for drug-related convictions.

As previously opined in this space, we feel that the overcrowding situation is a clear sign that sentencing for conviction of crimes such as possession of Category 5 substances like kratom or marijuana would be the best place to start in order to ease the overcrowding in these facilities.