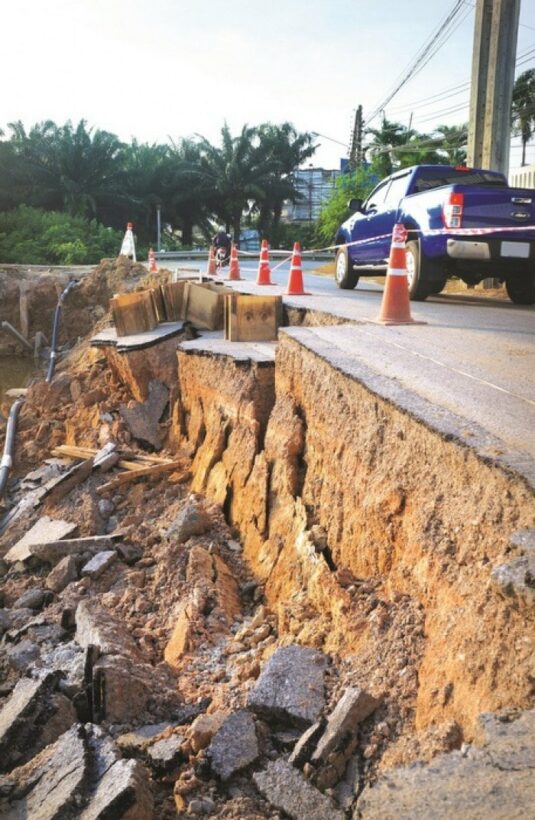 PHUKET: Confronted with a never-ending array of road-construction projects from multi-million-baht underpasses to reparation of enormous potholes, drivers travelling on Phuket’s roads – some of the most dangerous in the world – do so at their own risk, confirmed officials this week.

The issue of road construction safety measures was thrown into sharp focus after a Phuket lawyer flipped his more than 3-million-baht BMW Z4 at the Samkong underpass construction site on the bypass road, and a 10-million-baht-compensation demand was voiced by a mother whose child was killed when their vehicle crashed into an unmarked sinkhole.

An estimated 26,312 people die in traffic accidents in Thailand every year, putting it at ninth place among the top 10 countries with the deadliest roads in the world, according to the World Health Organization. However, when measuring traffic deaths per 100,000 people, Thailand takes the silver with 44 deaths, according to a study published last year by the University of Michigan’s Transportation Research Institute.

“Our office is aware that road surfaces are sometimes not safe for motorists due to construction. However, we do demand that construction companies follow site-safety standards,” confirmed Samak Luedwonghad, director of the Phuket Highways Office.

There are no laws set in place that allow local government officials to take action if a company fails to comply with the standards.

“Nobody wants accidents. Most companies follow the standards. When they fail to comply, we follow up. However, there are no laws that enable us to take direct action against them,” Mr Samak said.

“If there is an accident, a formal investigation must be conducted and we will pay whatever compensation is deemed necessary based on our responsibilities in the eyes of the law.

“Nonetheless, drivers must use common sense when operating motor vehicles.”

The United Kingdom’s Safety at Street Works and Road Works: A Code of Practice is a 108-page text dictating exactly how to ensure the safety of both those using public facilities and the workers repairing them. The primary question that those conducting roadworks, according to the manual, ask is: Will someone using the road or footway from any direction understand exactly what is happening and what is expected of them?

The simple answer in the case of the mother of seven-year-old Molly Anne Bailey, who died in a crash into a sinkhole in 2014, was no.

“I was fully aware of the sinkhole. I knew it since the first day, a month before the accident,” explained Nitikarn Rotrattanachai. “On the night of the accident, I didn’t see any road lights, warnings – nothing at all. I was driving with my low-beams on and they couldn’t reach the far side of the six-meter sink hole until it was too late.”

Ms Nitikarn, who has changed her name and attempted to kill herself multiple times since her daughter’s tragic death, explained that it was an exceptionally dark night and that she was driving less than 40km/h.

Despite the enormous sinkhole posing a lethal threat for more than a month, no contractor had started on the repair project.

“It takes time to establish the budget, get it approved and then start finding a contractor,” explained Srisoonthorn Mayor Worawut Songyos, who represents the municipality being charged for the death of Molly. “In this tragic case, we had already signed a contract with a contractor and the work was supposed to start the day after the accident.”

The local government had been charged with maintaining the road after the responsibility was handed over from the Department of Rural Roads Phuket Office, confirmed department chief Teeraporn Jirarattnakorn.

“We build the roads and are currently in charge of about 113km of roads. However, eventually the responsibility for maintenance is transferred to the local government body,” Mr Teeraporn explained.

Mr Worawut did not deny the municipality’s responsibility for the accident. However, he declared that they could pay only a ‘small amount’ of money for the young life lost.

Mr Worawut went on to emphasize that the municipality had not abandoned the case, and asked that both Ms Nitikarn and society at large understand that a 10mn-baht compensation went beyond their responsibility.

The municipality faces charges of negligence causing death, with the case expected to be handed over to the prosecutor in several weeks.

Unlike the accident that led to the death of Molly, road construction was already well underway at Phuket’s second underpass when local lawyer Rawit Manajira crashed his BMW into an enormous open hole along the roadside.

“I am now under treatment for my broken ribs, which will take about three months to heal,” Mr Rawit told the Gazette. “At this point, I haven’t filed a complaint against anyone for what happened. I just want to get well.”

Those concerned that dangerous road conditions are being ignored by officials can file a complaint at the Damrongtham Center (ombudsman’s office) at Phuket Provincial Hall, the center’s chief, Prapan Kanprasang, explains.

“People who have any issues with local authorities are urged to come to our office, so that we can start investigating the situation,” he said.

“However, in the case of poor road conditions, please ensure that you contact the proper authority before coming to us. If they fail to act, then let us know so we can investigate.”