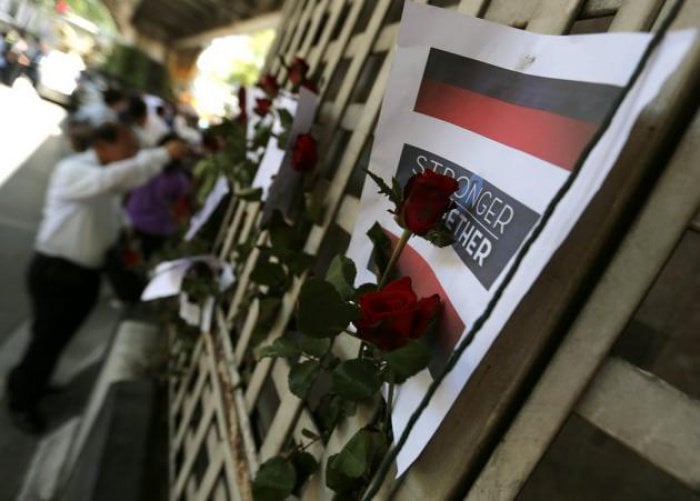 PHUKET: Last night I was three blocks away from the tragic bomb blast at the Erawan Shrine in Bangkok. Like so many nights when I am in the capital city, I stay at a nearby hotel and walk around that same corner to capture the unique flavor of a truly special place.

Call it routine or else a beckoning call to the heart of Thailand’s great city; I’d opted for an early dinner at Central Embassy’s EatThai.

Sitting with a friend and chatting over some wonderful food, messages started coming in on my iPhone about a bombing nearby. Looking around the eatery, dozens of faces were staring into the luminescent glow of smartphones and an eerie silence seemed to grasp the moment.

With more details of the event starting to roll in, my next move had to be contemplated, given the nearest path back to the hotel was directly through ground zero. Roadways were being closed and my friend wanted to get home quick. I saw no other option but to walk up the street and play it by ear on getting though the chaotic maze.

The streets were somewhat quiet, yet bizarrely, tourists who were unaware of the nearby incident were wondering about, totting fast food bags and chattering about sights along the avenues. Nearing Amarin Plaza and the Rajaprasong intersection, sirens howled, police blew whistles, traffic was redirected and the bright lights of camera phones nearly blinded me.

Approaching the bomb site out of sheer necessity, the cordoned off areas were crowded and a helpful security officer guided me through a parking lot shortcut which led me safely back to my hotel. The general manager was in the lobby, surrounded by security staff, dealing with angst-ridden guests.

Riding up the elevator, as dashes of chill music set the mood, I thought back to the reality that in another thirty minutes I’d most likely have been walking right into the bomb site returning to the hotel after dinner as I so often do. Was it luck, timing or the sheer randomness of life that took me out of harm’s way?

Travel for me is a true passion. Certainly it’s my work, but in reality I love the exploration, experiences and diversity of discovery. It’s remained a constant my entire life. I often think that the inability to move about the world to new places and people would be the ultimate prison or confinement of my soul.

It’s far too early to explain or understand what is behind the Bangkok bomb, except one motive is clear, that killjoy hash tagged as terrorism. Terrorists would have us live behind closed doors in fear, hovering about in cramped corners, unwilling to leave the known for the unknown. It’s tantamount to spiritual abduction, or losing your soul to the devil.

As I sit on a plane this morning typing out my feelings in the light of day after a long dark night, I can only vow: yes, I will continue to visit Bangkok as often as I can. I will still stay in the same hotel that has been my home away from home so many times for the past eight years, and yes – I will still walk past the Erawan Shrine and the Rajaprasong intersection as part of my journeys to and fro.

Travel is by nature a trip into the unknown. Terror attacks, plane crashes, shark bites and bad airplane food are just a view of the many dangers hanging over the heads of those who embark on journeys. Bangkok remains one of the world’s great cities. And yes, it joins the ranks of New York and London and so many other places that have felt the blow of terror. Do I avoid those great metropolises of the West? No. So why should I avoid Bangkok?

Mind you I have no death wish. Syria and Yeman are not high on my travel plans, and thrill seekers to war-torn areas to me are pure and simple idiots. There is no nicer term. But for me, Thailand does not belong in the same category, nor should it. My heart goes out to the dead and wounded tourists, as well as the nearby workers and innocent bystanders. This life, for all its magic and wonder, has a cruel side.

In the stark light of day, all that I can say is Bangkok, you are not alone in this dark time. I will be back again standing next to you in admiration and joy, just like I always have.

My passion for travel remains undaunted, unflinching and absolute.