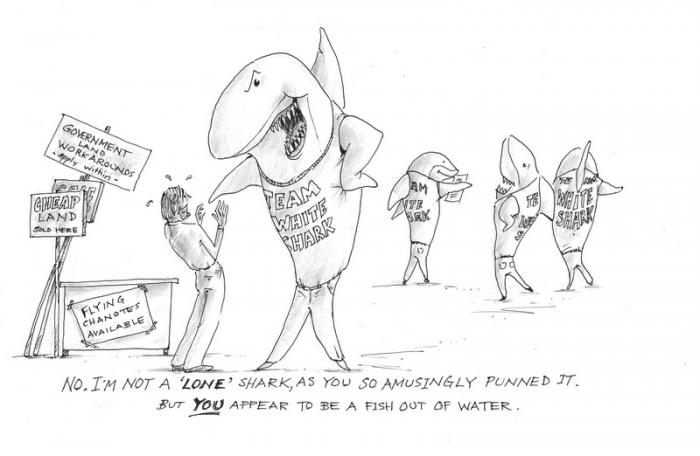 PHUKET: The Phuket Gazette supports the government’s efforts to return stolen mangrove land to the state, only if the investigation can be conducted in a fair and transparent way, that punishes the real wrongdoers and limits damage to innocent third parties.

Dating back to the start of the tin mining era in the 1930s, the destruction of mangrove forests at the hands of greedy ‘investors’ is nothing new to Phuket, and has been rife along the island’s east coast for decades. This rape of our public land has been allowed to continue to the present day – even decades after the importance of mangrove forests to both coastal and offshore ecosystems had been well established scientifically.

Thailand has a rich history of land probes, but many, if not most, have been limited in scale and politically motivated.

The investigation now underway by the so-called ‘White Shark’ team is unprecedented in that it is national in scale, focuses solely on mangrove encroachment and is ostensibly free of any political agenda. If carried out in a transparent manner, it could see the return of thousands of rai of degraded coastal land to the state for the redevelopment of these ‘national treasures’ – accurately described by the investigation team.

Unfortunately, much of this land could take a long time to recover after years of misuse, including the many plots that were used for shrimp farming – an environmentally unsound practice that has degraded vast tracts of former mangrove forest in many coastal regions throughout the country.
Even more problematic could be restoring ‘built up’ land, which is now home to golf courses and marina developments, if found to be acquired illegally. Such findings could have enormous social implications, putting scores of companies out of business and putting hundreds, even thousands, of people out of work. With each passing day, the possible ramifications of this unprecedented investigation appear ever more staggering.

As this edition goes to print, investigators were collecting information about alleged encroachers with the intent of turning this information over to the Phuket Land Department Office. It will be interesting to see if that agency takes any punitive measures against any of its own officers, past or present, without whose help the land grabbers could not possibly have despoiled so much our natural heritage.