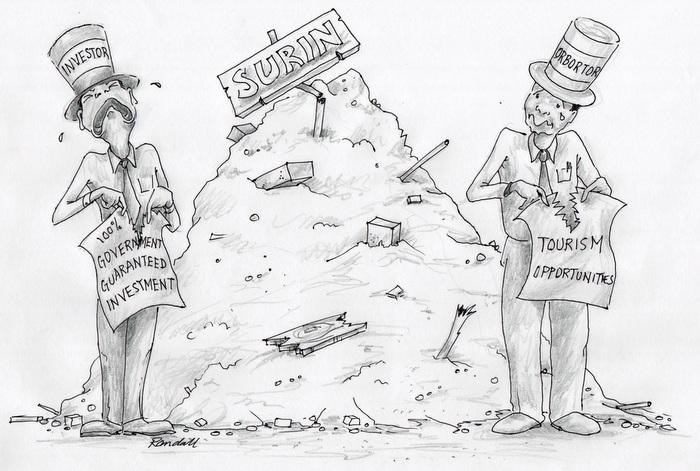 PHUKET: The demolition of the government-built buildings along Surin’s beachfront, which once housed a number of iconic Phuket beach clubs, marks the end of an era on the island.

Unlike numerous other beach venues that have been demolished since the National Council for Peace and Order (NCPO) started to sweep opportunistic, mafia-style business ventures from Phuket’s sands, tearing down these buildings breaks new ground.

The standard justification for removing buildings from the island’s beaches has been that the beaches belong to the public and are not to be a source of profit for the few who have illegally laid claim to them. However, a balance was necessary as the government juggled its desire to return the beaches to their natural state and the need for locals to support their families, which ushered in the 10 per cent rule.

The exceptions to the rule are virgin beaches, which are to remain uncluttered by vendors and their products. From these virgin sands emerged Surin Beach, which was dubbed the island’s ‘Honorary Beach’ to pay tribute to HM King Bhumibol Adulyadej’s visit to it in 1959.

Nonetheless, the buildings demolished were not on the beach. They were constructed in the adjacent public park after the 2004 tsunami by the Cherng Talay Tambon Administration Organization (OrBorTor) and the Phuket Provincial Administration Organization (PPAO) to provide economical opportunities to locals and boost tourism in the area. The strip of shops eventually became stylish, high-end venues iconic to the island’s beach club scene, housing Bimi Beach Club, Catch Beach Club, Diamond Beach Club and Zazada Beach Club, as well as a number of restaurants and other shops.

The demolition in 2014 of small structures associated with the businesses that had crept across the access path onto the beach itself seemed well within the lines of the NCPO’s plan. However, the destruction of all the government-built facilities that served as home base for these businesses took the effort to an entirely new level, as millions of baht of domestic and foreign investment were dumped into what is now just a pile of rubble in a public park.

Given that the buildings housing the clubs were built legitimately, and that it has taken officials nearly two years to decide the fate of the well-intentioned investors, it is no wonder investor confidence has been shaken.

But despite the quakes and tremors, established hospitality businesses on the island continue to invest. Within hours of losing both of its beach clubs at Surin, the Twin Palms group announced the opening of another one, in Kamala, soon.

As has been the case with nearly everything reasonably expected in the past to undermine investor faith here – from the government coups, the tsunami and Bird Flu scares to revelation of the land department’s wholesale business in the issuance of fake title deeds – Phuket’s tourism industry continues to show no signs of retreat.

We join the public in hoping that local officials will follow through with the NCPO’s plan to ensure the beautification of Surin Park so that it will indeed be an honor to HM The King. Given the recent history of public angst over the goings-on at that location, failure for this to happen would now be inexplicable.

Ministry of Farang Affairs: Finding a wife in Thailand

A Decade Ago: Songkran, road-safety and dive regulations