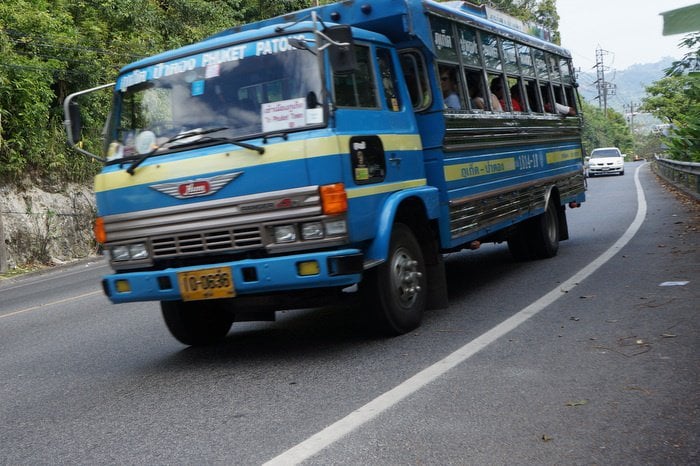 PHUKET: Even as my bus was drawing into the new Phuket bus terminal, predators were circling the bus full of unsuspecting, defenceless, bus-lagged tourists who were dying for a fresh shower or a chance to jump straight into the sea.

Little did they know that their short remaining journeys would cost them half as much – if not the full fare – as a ticket back to Bangkok.

This was going to be a feeding frenzy, a bloodbath, and it was all over in a couple of minutes.

We walked outside of the terminal and to the right I saw four metered taxis. I gingerly approached them, asking as politely as I could muster, “meter taxi.”

“Where you go?” was the man’s Gatling gun reply.

Now, anyone who has spent at least five minutes on the island knows full well where this conversation is going. So I replied, “You don’t look very happy.”

“Not happy sitting in traffic,” he exclaimed.

“Well you had better stay here,” I advised.

As I walked away he shouted, “Okay, okay, I have meter taxi.”

For me, the moment was lost.

So, now I was up a creek without a paddle.

But, the gods were looking down on me, as this must have been one of the coldest days of the year. A local pink bus flashed by.

I’m on, but to where I don’t know. Yes, that’s right, they do have buses after all.

The fare is 10 baht for this mystery tour, which includes such highlights as the courts, prison and infamous Land Office.

At least we had now entered into Phuket Town itself, so I had to figure out where the most advantageous point might be to disembark. I made my way to the Circle Market, where all the outlying buses have their terminus.

It was just a short walk up the final part of Bangkok Road to the circle. I turned left and there was a Rawai bus waiting for me.

Ten minutes later, we were on the road, my suitcase securely roped to the ladder at the rear.

Fifteen minutes later, I was at the end of my road, just another fifteen-minute walk to my home. This gave me ample time to reflect on the experience.

It was not so much that I had only spent a tenth of what I would have probably paid, but more to the point that I was able to deny those mercenaries even one baht of it.

Why is it that the No. 2 Pink Bus route does not enter and pick up passengers from the main regional bus terminus and transport them to the rest of the island?

They say you only make first impressions once, and I cannot think of a more counter-productive welcome than those currently being offered by tuk-tuk and taxi operators.

They are, in theory, your front-line ambassadors, representing your country. They have, for the most part, the first, initial, direct contact with international tourists arriving on this island.

Is this really the kind of welcome you wish to extend here? First impressions are not only memorable, but they are lasting as well. To paraphrase Winston Churchill: never have so few ruined it for so many on this island.

But for those of you who may have concluded that this is a rant, I have a happy ending for you.

It wasn’t long before a kindly Thai husband and wife drew up alongside me in their saleng on my walk home. Yes, that’s why I am living in Thailand, the generosity and true kindness of the Thai people.