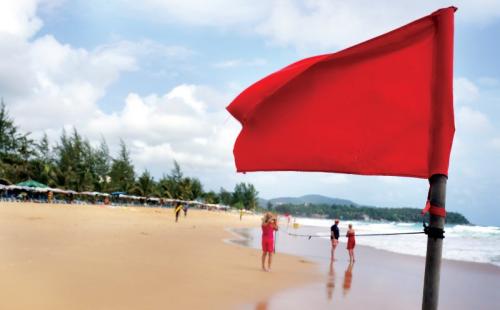 PHUKET: You arrive at the beach ready for a day of sun, sea and sand, but you are greeted by a line of different colored flags lining the shoreline: red, red and yellow, yellow, blue, red and white chequered. Most people, myself included, aim for the area away from the red flag as they know what that means. The others are just colored fabric on a stick.

Four swimmers died on Phuket beaches in the period June 20 to 23 and over 30 tourists were pulled from the surf.

Tourists were partially blamed for getting themselves into difficulty by ignoring the warning flags. This spate of drownings and the large number of people rescued from the sea indicate either that people choose to ignore the warning flags or they have no idea what they mean.

Flags are important on beaches to inform users about local information, lifeguard services and potential safety risks. Signs and flags are important not only to people unfamiliar with the beach but also to regular beach users in relation to currents and changing conditions.

However, the flag system used on Phuket, although an international system, is not familiar to all beachgoers.

Some people may never have been to the beach before and some might have been to a beach that didn’t have a flag warning system.

How many beachgoers know them all? Red means beach closed; do not enter water; red and yellow, patrolled area – the safest swimming area; yellow, warning – potentially dangerous conditions; blue, aquatic activity allowed within the boundary; and red and white chequered, evacuate the water.

Another factor to consider is that people by nature tend to follow the crowd. If someone sees a group of people swimming in an area, they will instinctively think that it is safe and go in the water there, even if these people are swimming in a red-flag zone. It is then up to the lifeguard to move these people out of the dangerous surf area and keep them out.

One way to keep tourists out of harm’s way is by sensory overload. Bombard them with safety information that shows them the dangers of the sea and what exactly each flag color means.

This can be done through an inflight video, pamphlets at the airport, hotels, tourist attractions and huge signs at the beaches.

We have an obligation to help tourists enjoy their time safely here and get home alive.