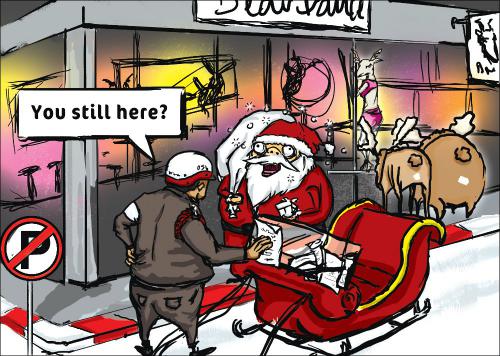 PHUKET: With the New Year rapidly approaching, we wait to see just how effective efforts mandated by the Phuket Provincial Police will be in ridding the island of illegal actions by numerous, unregistered taxi and tuk-tuk ranks by its specified “D-Day” of January 1.

Any long-term resident of Phuket can only hold hope that the promised effort will bear some fruit in reclaiming the streets from these disparate groups of self-entitled thugs, but the reasons to expect otherwise are many.

For a start, the timing could not be worse: New Year’s Day, when all involved in the annual storm of drunken revelry are recovering from the night before. This sad reality is proven by the fact that police in some locales do not even try to close down nightlife spots at the mandatory closing hours on that night, regardless of the law.

In fact, the announcement of “deadlines” as they pertain to law enforcement in Thailand seldom bode well for success, as we have seen here in Phuket many times in the past. More often than not, they pass with few or no results, emboldening violators in the same way spoiled children respond to empty threats by parents: actually worsening the situation.

There is a long tradition in Thailand of authorities and elected officials promising that “this project will open” or “that initiative will take effect” with the arrival of January 1 “as a New Year’s gift to the public” (story here).

This attitude is yet another insult to the intelligence of the tax-paying citizens who are always the ones stuck footing the bill for the incompetence of corrupt politicians and the officials who collude with them. In what realm other than Thai politics could government officers get away with labeling as a “gift” something that the public had already paid for?

Given the past track record, April 1 would seem a more appropriate deadline for implementation of most of these pronouncements. In the case of the so-called tuk-tuk deadline, it would also be a far more practical date, coming at the beginning of the low season rather than at the peak of the high season.

As is clearly seen from recent street protests, there is a huge, pent-up hostility against the social inequalities and status quo in this country, but thus far the next generation of would-be oligarchs seem to be successfully turning the masses against one another and diverting their attention from the root causes of our current woes: wide-scale corruption at every level of society.

We would love nothing more than to see 2014 start off with a massive crackdown against illegal taxi and tuk-tuk operators as promised, but years of experience tell us there is little likelihood of this. Nothing would make us happier than to be proved wrong.

Phuket Opinion: The toll of tourism