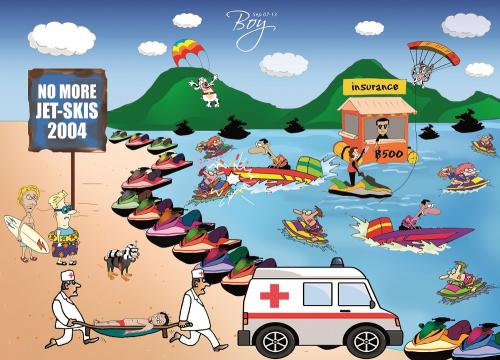 PHUKET: It is time that the provincial government considers phasing out the jet-ski rental industry that has brought so much ill-repute to the island.

The latest tragedy involving a jet-ski and a foreign tourist came last weekend, when 27-year-old Chinese visitor Shen Baocheng was rendered comatose after his rented jet-ski collided with a speedboat towing a parasailing tourist in Patong Bay (story here).

The accident came just a few days after provincial authorities held a two-day seminar with some 80 “legal” jet-ski operators, urging them “to provide better services and improve safety” for the sake of Phuket’s teetering reputation as a safe tourist destination (story here).

That seminar largely paid lip service to recent demands by the European Union (EU) and the government of the People’s Republic of China, both of which have called on the Thai government to do something about the industry, which is an endless source of complaints lodged by foreign tourists.

In comments made last June, EU Ambassador to Thailand David Lipman listed problems in the jet-ski rental industry as one of four key tourism-related issues in Phuket that EU countries would like to see addressed (video report here).

Some readers might remember back to late 2003, when a serious effort to gradually phase out jet-skis was initiated by then- governor Udomsak Usawarangkura (story here). Under that plan, a complete ban on new jet-ski registrations was ordered in the hope that as existing jet-skis suffered wear and tear and eventually became inoperable, their numbers would gradually be reduced. A complete ban was scheduled to go into effect in March 2011.

If only the Governor’s Office had stuck to the plan. Unfortunately, and for reasons perhaps publicly inexplicable, Gov Niran Kalayanimit in 2007 opted to allow jet-ski operators with old machines to register new ones, thus ensuring that the scams, accidents and other bad news involving them continue to this day.

Fortunately, Mr Shen snapped out his coma and will not be listed among the foreign tourists who lost their lives from operating a rented jet-ski in Phuket. More fatal tragedies are virtually guaranteed, however, under the current status quo – even if the compulsory insurance scheme is strictly enforced and operators try to do a better job.

A Phuket Gazette poll indicated that a majority of readers in every demographic would like to see Phuket free of rented jet-skis (see here). We agree: in addition to all the safety issues, they are noisy and even exacerbate traffic problems on land when their operators tow them back home at the end of the day.

Jet-skis do have a role to play on Phuket beaches, but that role should eventually be limited to helping swimmers in distress and other rescue efforts. It is highly unlikely that many tourists see the opportunity to operate a jet-ski as a compelling reason to travel to Phuket, but it is clear that their presence here is a factor in the diminishing numbers of quality tourists and their current preference for rival destinations.

This article originally appeared in the current issue (September 7-13) of the hard-copy Phuket Gazette newspaper, now on sale at newsstands throughout the island. Digital subscribers may download the full newspaper, this week and every week, here.

Phuket Opinion: So near, but often so far