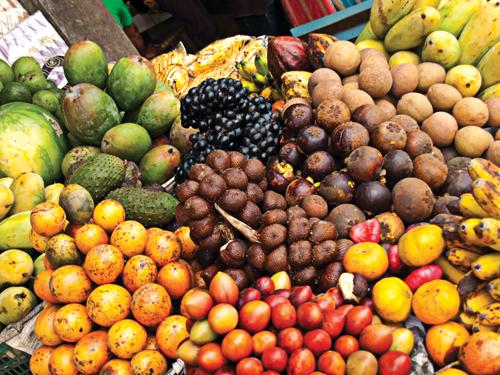 PHUKET: Sepp writes to say that he owns three villas in Phuket and “would like to change the gardens to [include] more fruit trees, fruit bushes and nice flowers”. He adds: “Can you help me to find the right ones?” and asks “which books could I buy?” Well, Sepp, even to attempt an answer all your wide-ranging queries would take several articles, so I am going to concentrate on the fruit tree issue. In any event there are not many bushes producing edible crops unless you want to include vines such as pumpkins, water melons or bitter gourds, all of which will need support, or vegetables such as aubergines or tomatoes which do fit the bill as bushes.

My choice of fruit trees suitable for a garden is listed later in this article. Moreover, most fruit trees do sport attractive flowers, so they can double both as decorative additions to your garden[s], and as sources of delectable fresh fruit for your table.

I considered including the dillenia or elephant apple (mataat) a small shrubby evergreen tree which has globular fruit and pleasant five-petalled yellow flowers, but is used in Southeast Asia mainly for chutneys. The jack fruit tree and its relative the bread fruit were other possibilities, but despite their exotic fruit and glossy foliage, they are slow to reach their mature height of 15 meters and are perhaps better as specimen trees for a large open space. Bananas have instant appeal: they are fast growers and heavy croppers. But the huge sail-like leaves do become tattered so if orderliness is a key criterion, than the kluay may not be for you.

The mango must rank high on anyone’s list. A favorite yard tree in Thailand, it grows quickly, has a neat habit and thick foliage –pinkish when young – making it ideal as a shade tree. Nor does it need me to extol its virtues as a luscious and distinctive dessert fruit, sweet and mildly perfumed. It can also be eaten green in savory dishes.

The papaya is just as ubiquitous. Like the banana (not technically a tree ), it has a fleshy, hollow stem and will grow almost anywhere. The massive, marrow-shaped fruits are carried at the top of the tree just below its crown of deeply indented leaves. Papayas are a staple of Thai cuisine, especially in Isaan where the unripe fruits are used to make som tum. When ripe, the flesh takes on an orange-pink tinge and is sweet, and scented. The papaya is good as a starter tree , since it is short-lived (two years or so) and easy to remove once it has finished cropping.

On the other hand, the lime, referred to here as a lemon, is more difficult to establish. Easy to find in nurseries, it dislikes being transferred from a pot, so be careful not to disturb its roots when transplanting. It has glossy , leathery, evergreen leaves, white star-shaped flowers and carries spines on its stems. More a bush than a tree, citrus aurantifolia tends to sprawl, so it may need staking or pruning. But nothing can beat the acidic zest of a lime straight from the tree. Put it on your list.

There are of course other citrus varieties in Thai gardens and orchards including several kinds of orange, the diminutive cumquat and the enormous grapefruit-like pomelo. Interestingly, all the major citrus fruits have evolved in cultivation from just three wild parent species; the citron, the shaddock or pomelo, and the mandarin. During the growing season, all of them need plenty of water and sunshine accompanied by some nitrogenous fertilizer.

Tip of the week – Growing your own mushrooms

There is a bar in Rawai called “The Magic Mushroom”. Its name is testament to the fact that some mushrooms are hallucinogenic or psychedelic: for example the small psilocybin toadstool. Some are down-right poisonous. But most mushrooms, and certainly all the cultivated varieties, are not only good to eat but are rich in medicinal substances such as betaglucan and polysaccharides which can help reduce blood-sugar levels, boost the immune system and act as anti-inflammatories.

If you want to cultivate your own supply, the process is relatively easy since you do not need sun or rain or conventional soil. Growing kits can be obtained from stores such as Macro and Super Cheap.

Hurry up to register for Turtle Fun Run

It’s all in the game – Phuket TECH