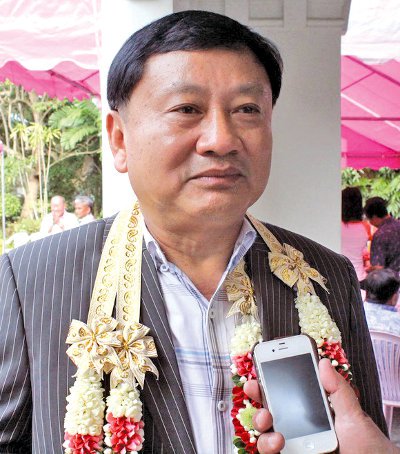 SPECIAL REPORT: Letter from the Governor

PHUKET: Over the years, my top concerns for Phuket have been flooding, traffic and wastewater. Flooding and traffic are no longer grave concerns for me because many projects have already received funding and many are already underway.

That said, with the new Phuket Governor due to arrive imminently, I would like him to rate traffic as the first priority. Traffic is now number one problem in Phuket. No one wants to be in a place where the traffic is so bad.

After the new governor arrives, I will come back to Phuket and explain what needs to be done in order to continue developing Phuket to make it a better place.

Further, what does worry me is that there are no major projects being planned to resolve the wastewater problem. I have received reports that only 70 to 80 per cent of wastewater in Phuket is treated to a safe standard before being discharged.

The areas that I worry about the most are those areas where there are many hotels and resorts. If the wastewater management system is inadequate, it can affect the environment of the whole community.

Environmental issues are one indicator that can rank Phuket as one of the top tourist destinations in the world. If we fail on environmental issues, then it will not look good for us and no one would want to visit Phuket.

Phuket is already known as a world-class tourist destination, but there is still a lot of room for improvement. We must not forget that the environment is an important aspect that should be treated carefully.

I have seen many towns that are fully developed but they [town administrators] have forgotten all about the environment. I think that towns like that show a lack of responsibility for the whole community. I don’t want Phuket to fall to that position.

I want Phuket to attract all kinds of tourists who enjoy a variety of activities: eco-tourism, cultural tourism and sports tourism.

I would like to pass this message on to the new governor: develop Phuket while preserving the environment. All the infrastructure that can serve locals as well as tourists should continue to be developed, but not at the expense of the beautiful natural environment that we have.

In my six years on Phuket I have watched the island grow so quickly, but I feel that the budget from central government has not come fast enough to accommodate Phuket’s fast rate of development.

Phuket generates more than 100 billion baht per year, but we receive only 100 million baht a year in return. If you ask me, I would say it is not enough to pay for everything that needs to be taken care of in terms of public affairs.

Most of the money spent covers the salaries of government officials. There is only about 20 per cent of the budget left for the projects we have planned over the years.

I would like central government to consider making all top destinations in Thailand, including Phuket, special administration zones. That way we can administer ourselves and use an appropriate amount of the income that we make per year on local projects.