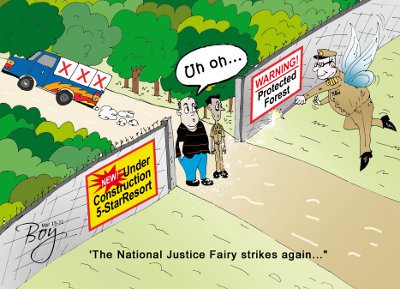 PHUKET: Cynics may see the effort by the Office of the Public Sector Anti-Corruption Commission (PACC) to investigate officials who allegedly colluded with investors to steal state land in Phuket as just the latest in a series of politically-inspired witch hunts. However, we should hold out hope for any effort to expose corruption, especially when elected officials and “civil servants” are among the alleged perpetrators.

The history of land rights in Phuket has been a Pandora’s Box. Corruption and collusion have been consistently powerful forces, so much so that most of the abuses will never be exposed. We have experienced many times what can happen to those who try to bring them to light.

This space is far too limited to list all the scandals involving land rights issues in Phuket over the years, but, simply put, we are looking at a landscape of vast inequity. On one hand are families who began to amass fortunes in the tin-mining era and who have since parlayed their holdings to become fabulously wealthy with the advent of the tourism industry and ensuing real estate boom.

At the other end are poor communities such as the sea gypsies, who have lived in certain seaside areas for generations yet find themselves at the mercy of Bangkok-based investors who appear out of nowhere with state-issued deeds and marching orders.

The 2,000 families in the Soi Kingkaew community of Rassada now fear mass eviction following the shocking presentation of a SorKor 1 paper, reportedly issued over 80 years ago.

This case highlights some of the absurd realities that have developed on the ground in Phuket over the years. Soi Kingkaew, once a vast expanse of verdant mangrove forest, is still nominally protected as such by the state. This is despite the fact that most of the land in dispute is now home to little more than a shanty town.

Rounding out the irony is the fact that these very same people who encroached on the mangroves in the first place are now donning the environmentalist mantle in telling the holder of the antique SorKor 1 that he cannot exercise his claim to the land because it is, or at least once was, protected mangrove forest.

The Phuket Gazette will closely follow the work of the PACC. We don’t expect all the abuses of the past to be addressed, but will remember that after the curious Pandora opened the box letting loose all of the evils in the world, at least one thing remained inside: hope.

If we can finally begin holding at least some officials accountable – and prosecute them – then perhaps we can gradually start moving away from the dark past to a brighter future.

Phuket Opinion: A tiny price tag for saving the mangroves