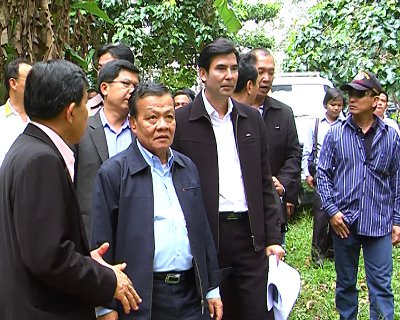 PHUKET: Government Spokesperson Prompong Nopparit, in his capacity as vice president of the Parliamentary Committee for Anti-Corruption and Misconduct, yesterday led an inspection tour of land in the hills behind the Kathu Waterfall.

The land in question is believed to be protected forest, but is now under investigation as the Phuket Land Office has received many applications for Chanote titles to be issued for parcels of land in the same area, Lt Gen Wirote explained.

“This is a tropical rainforest and a water source for the Kathu Waterfall. If Chanote titles are issued for more than 200 rai in this rainforest, then it will affect the ecosystem,” said Lt Gen Wirote.

“We are inspecting this land here today because we received complaints that many people were trying to get Chanote titles for this land – which would be illegal,” he added.

Mr Prompong said the investigation was still in its early stages.

“We will be fair to all parties. Now that we have seen the land in question, we will discuss this issue with all relevant government agencies,” he said.

After the site inspection, Mr Prompong and Lt Gen Wirote went to Kathu Municipality to discuss the issue with officers there.

Yesterday’s inspection tour is the latest in a series of high-publicity investigations into the ownership of Phuket land, including the probe into the 4 billion baht land scandal at Freedom Beach and allegations that former government officers have been deeply involved in illegally issuing land titles.

Sithichai Promchart, the current chief of the Phuket Land Office, has publicly voiced his support for the recent spate of investigations into illegal land titles, saying that such action would help deter people from engaging in further illegal deals.