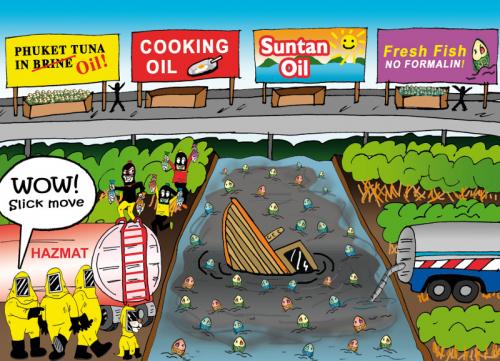 PHUKET: It is high time for authorities to take serious steps to crack down on oil smuggling in Thai waters. The latest reported case in Phuket revealed itself in the most noxious of fashions last week, when the 20-meter fishing trawler Premika sank in the shallow waters of Klong Tah Jeen, allowing much of its cargo of tens of thousands of liters of diesel fuel to spill out into the remaining stands of mangrove forest that line the waterway (story here).

The case of the Premika is a tragic indictment of our government agencies’ collective failure to prevent fuel oil smuggling. The vessel is just one of hundreds – if not thousands – that are used in the unregulated trade that thrives in virtually every coastal province of Thailand.

As previously reported, a former registered caretaker of Premika was caught discharging some 40,000 liters of “heavy fuel” at Phuket Deep Sea Port back in September 2011. The caretaker, whose name indicates he is a member of one of the island’s most prominent political clans, was summarily taken to Phuket City Police headquarters and forced to pay a fine, calculated as a multiple of “taxes owed to the state”. Like many others before him, he was subsequently released as the existing law does not impose prison sentences on violators.

In the latest case, the owner of the vessel has been identified, but at last report “police were still looking for him”. The Phuket Gazette would advise readers not to hold their breath waiting for the man to be taken into custody. Like land encroachment, oil smuggling is yet another “rich man, poor man” game in Thailand.

Financed by “influential figures” who are generally above the law, the smuggling work is carried out by some of the poorest members of society, including many illegal aliens. In the rare cases where arrests are made, the masterminds pay off the measly fines, which are merely viewed as a “cost of doing business”.

The financial and social factors that encourage fuel oil smuggling are very well known to the Marine Police, Excise Department and other agencies assigned with prevention. The huge difference in fuel costs between Thailand and neighboring countries, the paltry fines and rampant corruption all combine to ensure that the racket is here to stay until Thai legislators rewrite the law and then enforce it in a way that ensures lengthy prison sentences are mandatory for the people behind it.

Perhaps saddest of all in the latest case is the almost complete lack of public outcry about this environmental disaster, which would have been national news in any country with a developed sense of environmental awareness.

With all this in mind, the Gazette notes with irony that the much-needed development of our Deep Sea Port remains on hold because the project has failed to pass its EIA review “on environmental grounds”.

Phuket Opinion: Expats in need – who you gonna call?

Phuket Opinion: Semi-naked is not an option