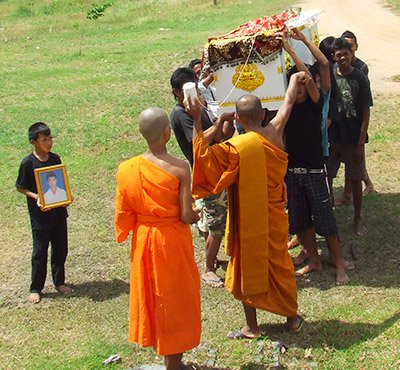 PHUKET: Just hours before this editorial was written, friends of slain Phuket teenager Surachai (‘Neung’) Takuasook were burning his remains in the furnace of the crematorium in Baan Don village. (See front page story, current issue of the Phuket Gazette. Digital subscribers click here to download the full newspaper.)

The shiny white coffin used to house Surachai’s body until it was pushed into the fiery chamber read “Surachai Takuasook – age 17”, although Surachai was just 13 when his young life ended.

The age given on the the casket reflects the family’s belief that it would somehow help the spirit of Surachai enjoy a longer life span during his next reincarnation.

While just one in a seemingly endless line of senseless killings that have been reported in the Gazette in recent years, Surachai’s murder stands out in a number of ways.

Police have yet to make any arrests, but there is a strong suspicion among both investigators and family members that his assailants mistook Surachai (‘Neung’) for his identical twin brother, ‘Song’.

The pair, with their nicknames of ‘Neung’ (One) and ‘Song’ (Two), entered the world just minutes apart, but that was time enough for Neung to be Number One and always the phii (older brother), while his twin would always, by definition, come second.

Identical twins share a closeness that few people understand. While continually being associated with each other, they have to fight to establish a unique identity for themselves in ways most people could only imagine.

Given these facts, it’s interesting to reflect on whether the parents’ choice of nicknames had any influence on how the children ended up: with Neung the more helpful brother and Song decidedly more “naughty”, according to the parents themselves.

To whatever extent the name issue matters, if at all, it is a sad irony that whatever struggle Song underwent to establish a separate identity from his brother ended early last Sunday morning with four gun blasts, all likely intended for him.

It is difficult to contemplate the thoughts that must be running through Song’s young mind, but the Gazette was glad to see him follow his parent’s advice and ordain as a Buddhist novice, rather than following through on his desire to avenge his brother’s death.

In the wider context, it is important that the Phuket Police investigating this murder not only find those responsible, but also work toward reducing the dangerous and ongoing tensions between the teenagers of the Baan Don and Baan Plu Som Pan communities.