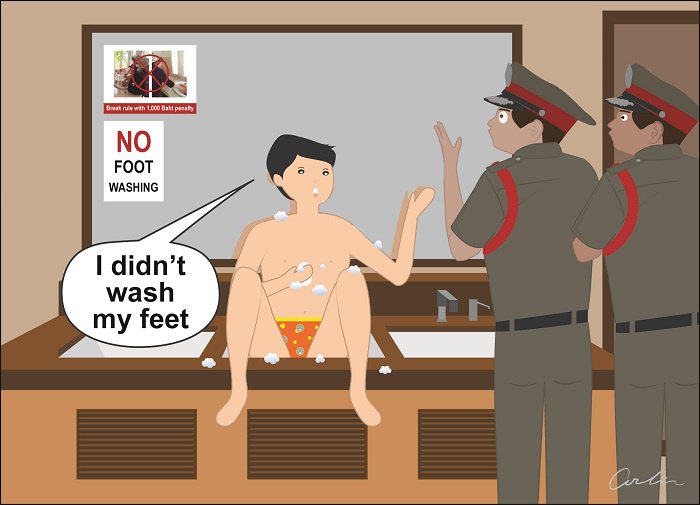 PHUKET: The fining of a Chinese tourist for washing her feet in a sink in a public restroom on Phi Phi Don hardly comes as earth-shattering news.

It does, however, raise several cultural issues in a country which is so dependent on mass tourism, but at the same time famously sensitive to issues regarding the lowest of the lower extremities.

Why anyone would choose to contort themselves into a position to wash their feet in a raised sink clearly designed for hand use is anyone’s guess.

It is certainly possible to conjure up emergency medical scenarios that might justify such an action, but such alarming situations would no doubt be few and far between: hardly frequent enough to spur park officers to erect a sign not only banning the practice, but threatening a 1,000 ‘bath’ [sic] fine.

If true, the fact that it only took said officers an hour to rake in their first 1,000 baht also tends to indicate that the practice, whatever might be driving it, is more common than one would expect.

Lacking in-depth knowledge about Chinese customs, but aware that female “foot binding” was widespread in China for many centuries, the Gazette asked reliable sources in the Mainland Chinese expat community if we were missing some key piece of foot-related Chinese cultural information that needed to be understood in this puzzling phenomenon.

However, these sources assured the Phuket Gazette in strong terms that such behavior would be looked down upon as “very abnormal” in their country and suggested that the unnamed woman at the center of the controversy may simply have been “an eccentric”.

Mainland China is perhaps the “final frontier” for Thailand’s inbound market, one which will likely play a key role if there is any hope of filling all the hotel rooms that were built during the huge expansion of the tourism sector in recent decades.

Given this information, it is time to gear up and prepare for this huge potential market and ensure that they get the most vital information before arrival: such as the need to stay out of the surf when red flags are flying in the upcoming southwest monsoon season.

As for washing feet in public sinks on Phi Phi Don, the Gazette will of course continue to monitor the situation to see if this disturbing phenomenon becomes more widespread, though we fully expect that this will be the last we hear about it once news of the stiff fines – and the existence of purpose-built foot washing facilities out back – becomes known to Chinese tourists and those who guide them through this Land of Smiles.