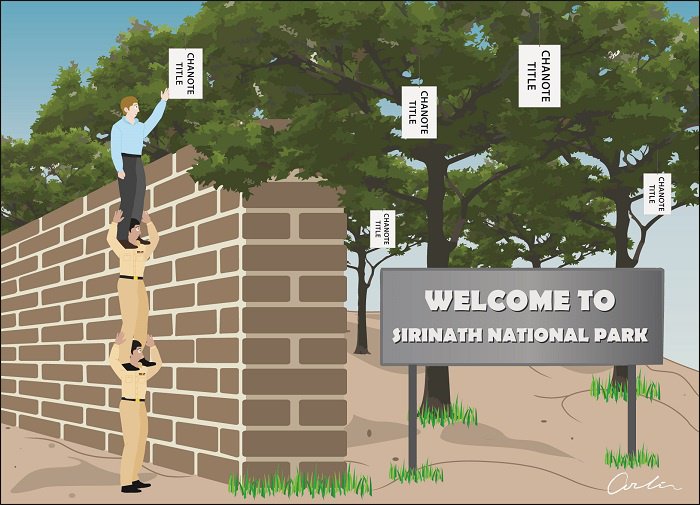 PHUKET: The recent request by the Sirinath Marine National Park chief to invoke Article 44 of the interim Charter in order to speed up the investigation and prosecution of long-standing land encroachment cases raises important questions and concerns.

Use of Article 44 would speed up the judicial process in encroachment cases already in the court system and hasten the Land Department’s cancellation of land title documents illegally issued for park land, stated Sirinath National Park Chief Kitiphat Tharapiban.

The need for this issue to be swiftly addressed can be seen in the scale of the problem. Some 4,000 rai, or almost 30 per cent of the marine park’s total terrestrial area, needs to be reclaimed from alleged encroachment of various types, the park chief said.

Such a staggering amount of encroachment could not have been carried out without involvement of government officials.

That this was indeed the case is indicated by the fact that at least five former park chiefs, along with one former deputy governor and many other Land Office officials and other bureaucrats, face charges for illegally issuing documents that allowed swaths of prime park land to fall into the hands of so-called ‘investors’.

While the powers issued to the National Council for Peace and Order (NCPO) under Article 44 have drawn criticism from abroad, most of the orders issued thereunder do indeed address serious issues that affect national security and are, for the most part, rooted in corruption.

Previous governing bodies failed to put an end to encroachment at Sirinath National Park and a score of other parks nationwide. The plundering of these national treasures was carried out in plain sight, with many of those responsible for protecting these precious resources more interested in using their positions for profit than upholding sworn oaths to protect them.

If ‘extraordinary measures’ need to be taken to tackle the problem, expats and locals on Phuket should help by supporting this initiative – for the simple reason that previous efforts by elected governments failed so miserably.

That said, it is important that the prosecution of those involved in encroachment be carried out in a fair and transparent way.

Businessmen who can prove they invested in these projects in good faith and were duped by lawyers, land officers and others operating up the ladder of corruption should be treated leniently under the spirit of the law, not as scapegoats.

Corrupt officials who facilitated this plunder of Phuket’s only national park should be prosecuted to the fullest extent of the law and, if found guilty, have their assets seized and be sentenced to stiff prison terms in order to set an example for all who follow.