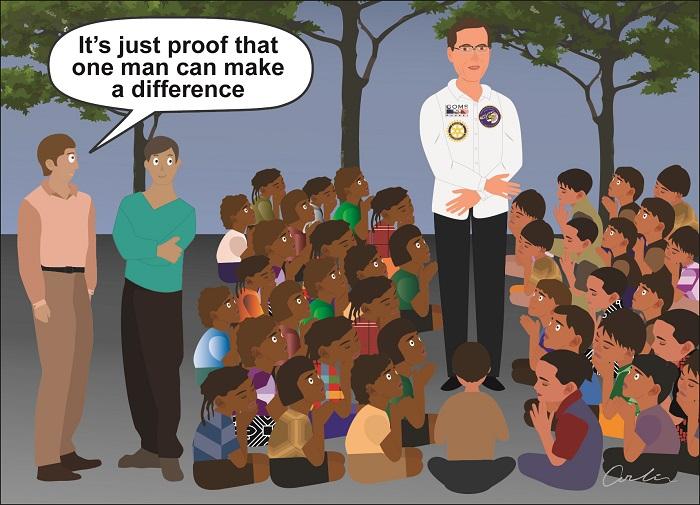 PHUKET: The Phuket Gazette joins with the entire Phuket community in mourning the passing of one of the island’s most well-known and respected expats, Brad Kenny, who died at the age of 59 on December 11.

Brad lived an exemplary life of self-sacrifice and service to the less fortunate, both independently and through the many charitable organizations of which he was a part. These included the Rotary Club of Patong Beach (RCoPB), of which he was a charter member and served as president last year when the chapter was awarded the HRH Crown Prince Maha Vajiralongkorn Trophy, Thailand’s highest service award.

In addition to his numerous and never-ending charitable works, which are too extensive to be listed in this space, Brad was extremely helpful to this publication over the years. He provided valuable insight on a wide variety of topics, ranging from tsunami recovery efforts and landslides along the bypass road to important environmental and water-related issues. Indeed, Brad was one of the island’s leading experts on water issues through his experience with his company Environmental Solutions & Protection (ESP) Corporation.

It is fortunate that after more than a decade of service to the community, Brad’s efforts and sacrifices were recognized before his sad and unexpected passing.

In 2010, he received the highly-prestigious Sahataya Naval Insignia and Certificate from the Royal Thai Navy for his work with the American Navy League. Brad was involved in no fewer than 63 US Navy Community Relations (Comrel) and Handclasp projects, which often saw visiting US Navy servicemen and women on ‘rest and relaxation’ stops on the island going out to paint at local schools or take part in other kinds of community service work.

As a father of three, Brad was also a key member of the parent’s association at QSI International School Phuket and always helped out with school activities.

Politically, Brad was an outspoken Democrat and liberal who maintained a keen interest in American politics despite having left his home country for Thailand more than 15 years ago. He was active on social media; hardly a day would pass when he would not serve up a Facebook posting pointing out the lunacy of American gun control regulations or commenting on some of the other social issues he was passionate about.

Many of his Facebook friends (this editorial writer included) were thrown into a state of shock and denial after reading of his passing through this same media after his family posted the sad news of his passing.

We join the entire Phuket community in offering our deepest condolences to the Kenny family at this difficult time and hope that all who knew Brad will take time to reflect on his life and many achievements as a source of inspiration and as a reminder that it really is better to give than receive.

Ministry of Farang Affairs: Why the wai?