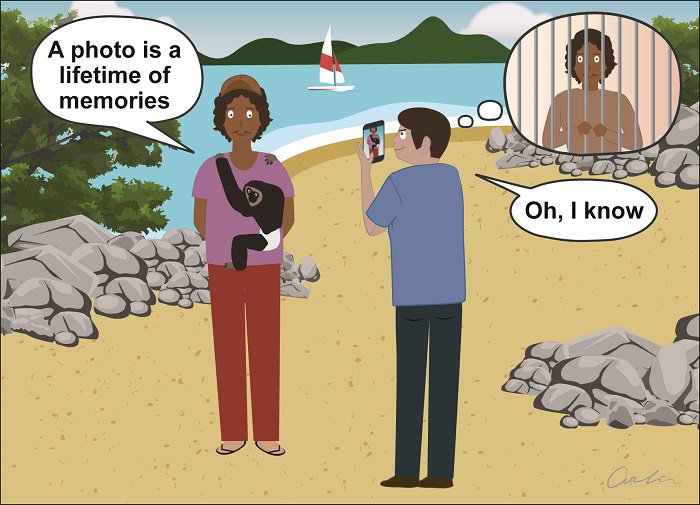 PHUKET: The recent arrest of a number of touts for the illegal possession of gibbons on Phi Phi Don Island reveals, yet again, the continuation of the pathetic practice of using exotic animals as props to make money from uneducated tourists in Thailand.

On a somewhat brighter note, the fact that the arrest followed images being sent to the Gazette by concerned readers indicates that the public, together with social and traditional media, have a key role to play in eventually relegating these practices to where they belong: the annals of history.

Phuket has come a long way in limiting the number of animal photo touts that line the streets in popular tourist areas such as Soi Bangla in Patong, where a police officer once famously quipped, “I am a person policeman, not a monkey policeman,” when asked why he did not take action against illegal photo touts.

As mentioned in this space just over a year ago, the National Council for Peace and Order (NCPO) coming to power represents Thailand’s best – but perhaps last – chance to rid the island of these malefactors once and for all.

Unfortunately, the dynamics of greed and ignorance that drive the illicit trade are still largely in place, despite increased public awareness about the utterly cruel and inhumane way that baby gibbons and other primates are captured in the wild – by shooting and killing their mothers.

First-time tourists to Thailand who are ignorant of these facts can perhaps be forgiven for paying to pose with these animals. They arrive here with expectations of exotic experiences, and what could fit the bill better than having a python draped around one’s neck or cuddling a drugged-up baby primate?

For a fleeting moment, it might make them feel like they have been transported into an alternate reality, like a scene out of a Game of Thrones episode. Little do they know that their ‘Instagram moment’ comes at the cost of a lifetime of suffering for gibbons and other primates, who are caged up or even killed once they reached maturity and are no longer cute or cuddly enough for use in this sickening trade.

One of the many other sad realities that result from the photo tout trade is that after having posed with one of these animals, some tourists develop a sense of false security in dealing with primates in more natural settings. Just one example here in Phuket are the pig-tailed macaque colonies on Khao Toh Seh, also known as Monkey Hill, where numerous tourists have been bitten while feeding the large and growing population of monkeys there.

It is necessary to see an end to photo touting with all animals, regardless of conservation status. It is a low-class activity that cements perceptions abroad of Thailand as an ‘anything-goes’, third-world country – at a time when we need to work harder than ever to sell the country as the world-class destination it can and should be.