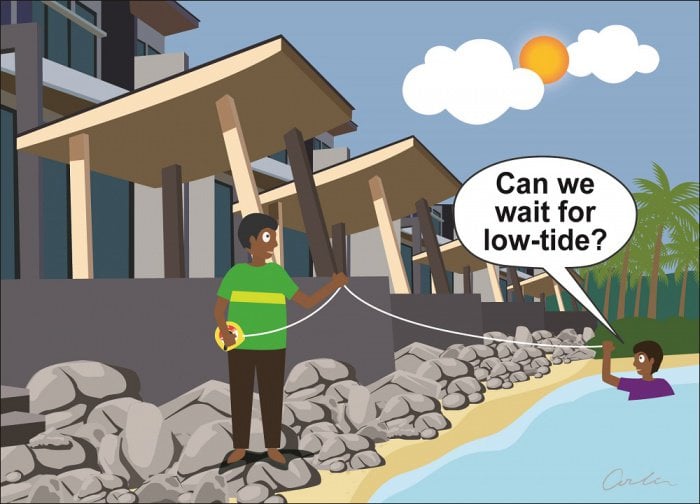 PHUKET: There is reason to be cautiously optimistic that the unprecedented involvement of the Administrative Court system in a controversial real-estate development case in Rawai (story here) could mark the emergence of a powerful new tool to ensure that local administrative bodies do a better job approving and overseeing work on future projects on the island, thus bolstering investor confidence.

It is clear that over the past decade unsound real-estate project planning, design and construction techniques have played a major role in the degradation of Phuket’s natural resources.

The breathtaking natural beauty one would have observed when taking a leisurely drive along any of the island’s coastal roads 20 years ago now survives mostly in the memories of those who had the opportunity to savor them at the time.

Travelling along the same thoroughfares nowadays is more of a white-knuckle experience for drivers, who are more interested in keeping their eyes on the road and staying alive than staring up at so many cookie-cutter condo and real-estate projects that extend far up into the hillsides, in many cases blatantly defying the ban on permanent structures 80 meters above sea level.

Huge swaths of virgin tropical forests situated on coastal hillsides across the island have been sacrificed – illegally and otherwise – in the name of these so-called “developments”. Even work around one of the island’s top tourist attractions, the Big Buddha image high in the Nakkerd Hills of Karon, has led to an unprecedented rise in encroachment on state forest land.

In parts of the island further from the coast, entire hillsides have simply been excavated to make room for residences or even for use as fill, leaving behind ugly, unnatural escarpments. In many cases, subsequent erosion has resulted in landslides, some deadly.

Like so many of the important issues that have been addressed in this forum over the years, the crux of the problem lies not in existing environmental laws and regulations, but in the abject failure of many – if not most – local officials to simply execute their duties as the first line of defense in protecting the environment.
The Administrative Court established divisions to deal with “green cases” back in 2011, but to our knowledge this is the first time its regional headquarters in Nakhon Sri Thammarat is taking legal action in Phuket against local administrators for allegedly failing to enforce building codes applying to coastal developments.

Without commenting further on the details of this individual case, which is still under investigation, the Gazette certainly agrees with the introduction of any new legal mechanisms that will hold local administrators more accountable.

Systemic corruption among developers and local planning boards has been part and parcel of real-estate development on the island for far too long. Setting an example which demonstrates that such practices will no longer be tolerated could be a step in the right direction for saving what remains of Phuket’s once-abundant natural resources.

Chinese New Year is for all islanders