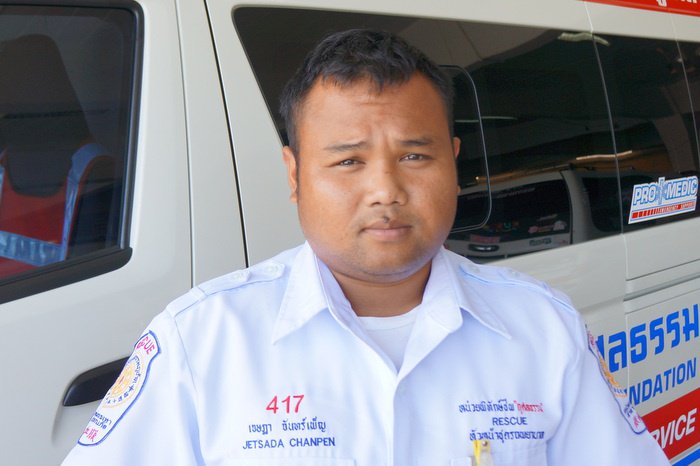 Jetsada Chanpen, 27, from Ranong, has been a Kusoldharm Foundation rescue worker for eight years. Last year, he almost lost his life doing what he loves. On March 26, Jetsada was the first to respond to an accident in which four workers had passed out in a sewer in Phuket Town. Wasting no time, he plunged into the sewer to rescue the men. Seconds later, he also passed out due to the continuing build-up of hydrogen sulfide fumes.

Luckily, Jetsada was saved, and after a long recovery, has returned to work. In June, he was awarded the Rotary International Family and Community Service Award for his bravery and commitment to community service.

Here, he talks about the importance of safety on work sites in Phuket and what he has learned.

PHUKET: I have seen so many accidents happen in the work place, the majority of which have involved electric shock, or falls at construction sites. Kusoldharm Foundation rescue workers have rescued mostly construction workers involved in these kind of accidents.

While it is impossible to predict when an accident is going to happen, they can be prevented by exercising caution at all times, especially when working in a potentially dangerous environment.

Believe it or not, most accidents involving electric shock are caused by laborers using mobile phones, while working near high-voltage power lines. It is imperative that workers do not use their mobile phones when they are near power cables. It has cost many lives already and will no doubt cost even more in the future.

In fact, using a mobile phone while doing any kind of construction work is very dangerous. Workers should refrain from using them during their shifts, because they are distracting – no matter what you are doing – and can cause you to make stupid mistakes. It only takes a second to change your life, so caution is important.

I know from personal experience how quickly things can change, if you do not think through your actions carefully first.

When I jumped into the sewer to help those workers, I hadn’t taken time to think about the consequences of my actions. I did not know that the gas was so dangerous. In retrospect, we should have contacted the engineering team who take care of the sewer to find out what risks were involved. We also should have taken the time to protect ourselves before diving in.

The foundation and its members learned a lot from that accident – the first serious one affecting rescue workers in our foundation.

We now have regular meetings to ensure that we always plan ahead before we go on a rescue mission. On arriving at the scene of an accident, we now evaluate the situation carefully before moving in. This ensures that none of our rescue workers make the same kind of mistake I did.

When it comes to construction and work sites on the island, I cannot truthfully say that working conditions here are safe.

To begin to change this, workers must be diligent and always assess a situation before starting a job. If they believe that they or their colleagues are at risk, they should immediately inform their supervisor. Workers must not ignore red flags and continue to work in dangerous situations.

It truly comes down to team work, proper protective gear, equipment and communication within departments and with superiors on the work site.

Adequate training for all workers, including rescue workers, is also of the utmost importance.

For example, Kusoldharm Foundation rescue workers have been trained by the Phuket Marine Police in water rescue, including diving. We also train often so that we are always improving and ready for any emergency.

I feel blessed to be able to rescue people. My own accident taught me so much about safety, and helped me realize that what I’m doing is important and worthwhile.

Opinion: Promote the sport of jet-skiing in Phuket