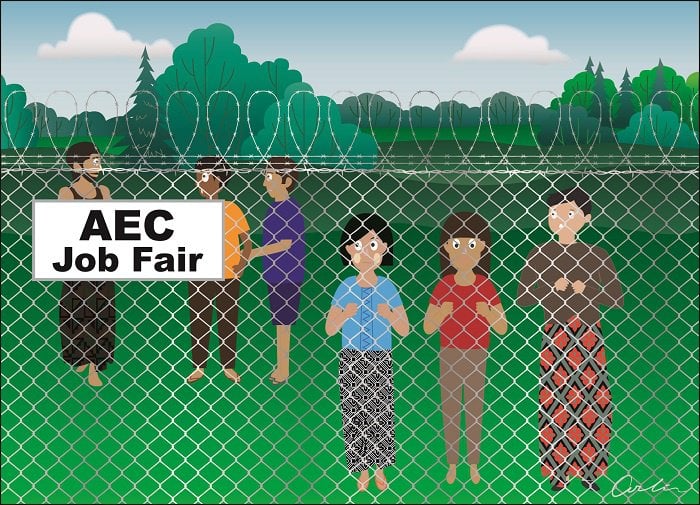 PHUKET: The discovery of a mass grave of dozens of migrants from Myanmar and Bangladesh in Songkhla’s Sadao District, on the border with Malaysia, this week screams urgency for the National Council for Peace and Order (NCPO) to use its extraordinary powers to turn the tide against human trafficking in the Thailand.

The order by Prime Minister Gen Prayut Chan-o-cha to bring to justice any officials who were aware of the illegal activities at the detention camp must be enforced. Those responsible must be found guilty and face full justice under the law.

Any action less demanding would only make a mockery of the National Legislative Assembly (NLA) voting just six weeks ago to introduce life imprisonment and the death penalty in cases where human traffickers’ victims had died (story here).

The discovery of the mass grave at a remote detention center a few hundred meters from the border is just the latest indication of the vast scale of human smuggling and trafficking through Southern Thailand.

Human rights advocates make a distinction between “human smuggling”, which takes place with the consent of the illegal immigrants involved, and the more serious crime of “human trafficking”, cases in which intimidation, coercion, deception or force against victims takes place.

By all accounts, this latest atrocity fully qualifies as the latter.

Barring another postponement, the terms of the Asean Economic Community (AEC) agreement are set to take effect at the end of this year. However, events on the ground continue to make a mockery of the regional bloc’s stated intent to use “increased cooperation in human resource development” to achieve regional economic integration and create a single marketplace with increased global competitiveness.

The sad truth is that Asean’s charter mandate of non-interference in any member state’s internal affairs provides just the right environment for cross-border human trafficking of stateless people such as Rohingya to flourish in the region.

The AEC Blueprint, drafted in 2008, outlines in great detail how the bloc’s ‘One Vision, One Identity, One Community’ objectives will come about through freer flows of goods, services, capital investment and labor – but only skilled workers need apply.

Absent from the 59-page document are terms such as ‘human rights’ and ‘human trafficking’, perhaps indicating by their absence that the region’s real competitive advantage will remain dirt cheap costs for unskilled labor and the continued existence of what essentially amounts to a modern-day slave trade.

Human-trafficking victims are hardly limited to ethnic groups such as the Rohingya. Phuket alone is home to untold thousands of stateless illegal aliens, many born on the island to illegal laborers.

Many of these people were smuggled onto the island, delivered in the same manner as the 2008 ‘death truck’ that left 54 Myanmar nationals dead from suffocation inside a seafood container bound for Phuket.

Of the 121 people found in the sealed container heading from Ranong, 17 men, 36 women and one 8-year-old girl were found dead (story here).

Those who survived the delivery to Phuket are now often fluent in Thai and their children have known no other home, yet they exist as part of a large, and growing, underclass of stateless people throughout the Asean region.

These people have no access to education, basic medical care and the most basic human rights that the rest of us take for granted. Worst of all, they are also primary targets of human traffickers who invariably seek out the most defenseless and vulnerable to exploit.

Thailand needs to work with its Asean partners to address this threat to regional stability and not merely focus on ivory-tower economic development plans that will make the region’s richest elites even wealthier.