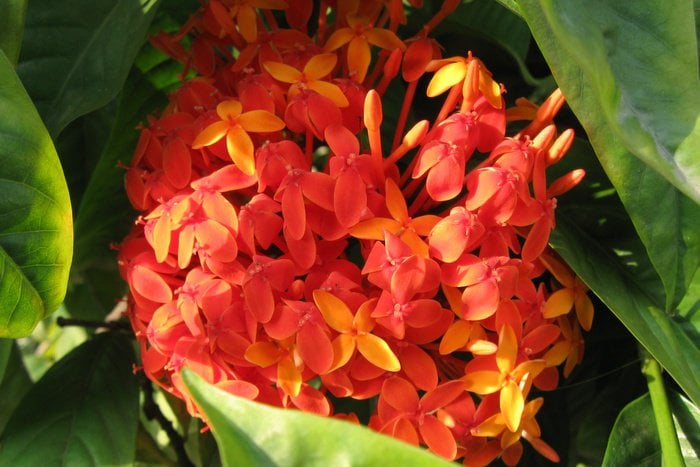 PHUKET: As the poet W.H. Auden once observed, “Thousands have lived without love, not one without water.”

That adage is equally applicable to the plants in your garden, though loving your charges and watering them are part and parcel of the same impulse. Now, after three months without rain, Phuket’s gardeners are all prioritizing their use of the world’s most precious commodity.

Personally, and since I have no functioning water well, I have decided to let the grass turn brown and sere in the expectation that a good downpour – or three – will restore its verdancy. The same principle applies to established trees: their deep root systems should ensure their survival.

Container plants, however, still have to be watered on a daily basis: that is to say everything growing in ceramic pots apart from cacti, succulents and desert shrubs, such as euphorbias and adeniums. As for the rest, and granted a continuation of these xeric conditions, without daily applications from the hose or watering can, they will first wilt, then shed foliage and finally expire.

Which brings me to marsh-loving flora. Not the ones recently discussed in these columns: plants which actually live in water with submerged roots like nymphaea, lotuses, papyrus, water cannas, reed mace, or the flotilla of tropical floaters such as water hyacinths, water chestnuts and water lettuce. With all of these, just top up their pots with more liquid, and maybe add a fertilizer tablet for good measure. They should be fine.

Plants whose leaves require fresh air to breathe and whose roots sit in moistened soil present a different problem. To keep them going means heavier applications of water than is required by the rest of your land-locked collection. Sitting in shady surroundings will help to limit both water loss through transpiration and the drying out of roots, but they will still need irrigation.

When I first planted my garden – ‘designed’ is too grand a word – I put in alocasias (elephant ears) to provide some shade, and both canna lilies and heliconias. The idea was that the elephant ears, large specimens garnered from marshy, jungle waste ground, would provide instant shade for less robust neighbors. It worked well enough in the rainy season, but once the monsoon was over they started to struggle beneath the harsh tropical sun. After all, they are rainforest understorey plants that require the kind of humid, somewhat cooler conditions that my garden simply did not possess at the time. Now, years on, I have one alocasia left. It has survived, a specimen fully 10 feet tall, because it is next to a sizable tree and, more important, gets a daily dose of water in the form of run-off from the outdoor shower.

And there’s the rub. If you want to grow cannas, alocasias or heliconias, in fact most rainforest understory denizens or bog-loving plants, you will need either a consistently damp, shady area, or an unenclosed pond or canal which allows plants to thrive at its muddy margins. An ordinary flower bed just won’t fit the bill.

I recall my neighbor who, blessed with a soil-filled trough the length of his outside wall, planted rows of heliconias. An area in full sun and with a limited depth of soil, it proved too much for them. Within a year they had been replaced with orange ixoras, a tough shrub with leathery leaves that will take any amount of heat. Right now, three months into the drought, they are still blooming. I should add that my canna lilies, similarly misplaced, went the same way as the neighbor’s heliconias.

There is a further distinction to be made between understorey plants that simply need moist roots and high humidity, and those that, in the wild, occupy the zone between land and water, thrive at watery margins and can cope with waterlogged environments. Many irises – for example versicolor, laevigata, and the yellow flag pseudacorus – flourish in such conditions, as do gunnera, swamp milkweeds and most varieties of juncus (rush), sedge (carex) and reed.

It’s all about horses for courses. Selecting the right plant for the right location is half the battle.
Did I say battle? I mean make love, not war, at least with your plants.

On your mind: Message plays second fiddle to messenger