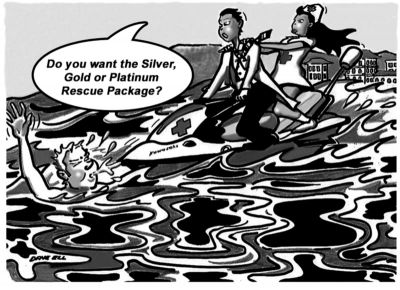 The news feature in the current issue of the Phuket Gazette, (see pages 4-5; digital subscribers click here), sheds some light on a newer recreational activity rapidly gaining popularity on the island: surfing.

There are now an estimated 250 regular surfers on Phuket, up almost tenfold from a decade ago. The sport has grown to the point that Phuket now plays host to annual surf competitions with international sponsorship and has a well-established association, the Phuket Boardriders Club, to promote surfing in Thailand.

While rival tourist destinations like Bali, Hawaii and Australia’s Gold Coast will no doubt continue to attract the bulk of hardcore “surf tourists”, Phuket’s west coast beaches offer good enough waves and amenities to keep the island on the map as an interesting surfing place, especially given the low cost of accommodation during the monsoon season.

The fortuitous presence of surfers along Phuket’s west coast beaches goes well beyond tourism revenue generation, however. As pointed out in this week’s Gazette, surfers have played a key role in beach safety by helping swimmers in distress back to the shore. In at least one case, an entire family swept out to sea was saved by surfers.

A study by Phuket-based American researcher Steven A. Martin documents 232 rescues of swimmers by surfers over the three-year period from 2007 to 2009. The actual figure is, of course, probably far higher.

This comes as a rare dose of good news for beach safety in monsoon-season Phuket, where scores of overconfident swimmers – mostly foreign tourists from Europe – have perished in recent years.

Apart from mobilizing surfers, another good suggestion made by Mr Martin is to inform inbound tourists of the dangers they face if they ignore the red warning flags and enter the surf.

In Hawaii this has been successfully accomplished by playing warning videos on all inbound flights. Such an approach, suggested several times in this space in the past, makes a great deal of sense; aircraft passengers comprise not only a ‘captive audience,’ but one that tends to be highly receptive to safety-related announcements.

The Civilian Aviation Department and provincial government should take immediate steps to put such a system in place before the monsoon season begins – and the death toll resumes its diabolical climb.

PHUKET OPINION: Learn to live with the gridlock

OPINION: In defense of Phuket Town